These are all books I tried in audio format, and I listened to more than half of each book before giving up. All three had come highly recommended to me, but they just didn’twork for me—at least in audio format.

I wanted to liked this because I’m a big Maggie Stiefvater fan. The Scorpio Races is awesome, even if it is in alternating first person (which I don’t normally like). And The Raven Boys is one of my favorite series. I used to think shapeshifters and werewolves weren’t really my thing, but I liked the Kate Daniels books.

So many people have raved about Shiver that I had to give it a try.

But, it was so slow. Yes, Maggie has a way with words. Yes, the nature of her werewolves was interesting. But so little was happening. And I like description fine, but so much of it was olfactory. I am not so into characters going on and on about the way things smell.

I’m glad I gave this one a shot, but I’ll stick with Maggie’s newer books.  This is a book that has had massive teen appeal (it was several Real Actual Teens who were most insistent that I read it) and it does really capture that you-are-my-world feeling of first love.

Book.Blog.Bake: “At the last half of the book, all the things that make this story unique really stand out. Maggie Stiefvater is a really beautiful writer. She writes sentences that make me want to curl up next to the window and listen to someone speak her sentences all day. I really appreciated the characters of Sam and Grace, and how they’re not your typical romantic leads. Grace is the practical, less emotional one, whereas Sam is an artists at heart, creating songs and poems in his head during every moment.” 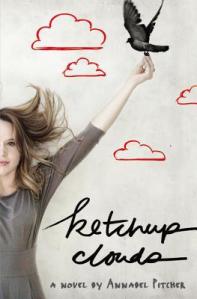 A British girl writing letters to an American death row inmate because she feels guilty about…something? Sounds great. And while the Perks of Being a Wallflower audio book is okay, despite the letter format, this one just didn’t work for me. Perhaps I didn’t like the narrator. But the long flashbacks via letter and tons of exposition and repetitive nature really grated on me. This is one I might try in print.

While the hook is so juicy, and would make it an easy sell, this isn’t one to hand to fans of I Hunt Killers. There’s not any action, and the pacing is entirely different. This is for a more thoughtful reader who’s willing to take a chance on something different.

YALove: ” I decided to listen to Ketchup Clouds because I really liked Julie Maisey’snarration when I listened to the sample on Audible. I enjoyed her accent and how easily she changed her voice for each character. I especially liked the voice she used for Zoe’s little sister Dot. Her voice for Dot really fits Dot’s character and charm. Julie Maisey paced the story well with her narration.”

Magan at Rather Be Reading: “Ketchup Clouds held my attention as I fought to piece together the mystery of Zoe. While I didn’t feel overwhelmed by the secret in the end, I do feel it was a very age-appropriate reaction to the situation at hand and accurately depicted how I would have felt were I to swap places with Zoe. I really enjoyed that Pitcher chose such a unique way of sharing Zoe’s story, and was happy with (what I’d consider) the surprise I found waiting for me at the end of the book. I was taken a bit outside my element as I was subtly forced to think about a prisoner on Death Row, but equally captivated by the secret Zoe was so afraid to share. If you’re looking for something different that will offer you a unique reading experience, definitely take a chance on Ketchup Clouds.”

All These Things I’ve Done by Gabrielle Zevin

One of my co-workers loved this book, and had been trying to get me to read it forever. When I was looking for an audiobook to take out of town one weekend, she insisted I give it a try.

The narration was fine. The story itself had some elements I really enjoyed. The family dynamics of a girl trying to take care of her elderly grandma, as well as her siblings, was interesting. I know it could turn off some readers, but I really loved the strict Catholicism that Anya subscribed to.  The romance was slow building and practical.

The world-building had a lot of potential, but was really uneven. The plot ended up just moving very slowly, and at the halfway mark, I just didn’t see a compelling threat or conflict that kept me reading. This is another book that just might be better in print.

Sarah at Clear Eyes Full Shelves: I was surprised that All These Things I’ve Done—despite wildly disparate reviews from readers whose opinions I trust—was a fresh and compelling entry amidst a slew of uninspiring dystopian trilogies.

Not every book works for every reader. Since I read in a wide variety of genres, I’m bound to encounter books that aren’t for me. Book Breakups gives me a way to discuss these books without sharing a full review, and I also (at least try to) identify the type of reader that might enjoy these books despite the issues I had with them.

Have you not finished a book recently? What makes you give up on a title?