I know it’s only halfway through March, but I try to keep a look out toward what’s on my reading horizon, even though I’ve still got some releases from earlier in the year I hope to read and review soon. Here’s what I’ve got lined up for April.

I was trying to limit these posts to only five titles, but I’ve been reading more than 5 of each new month’s releases, and am definitely excited about even more than I can read in a month. I’m still participating in The Hub challenge and Infinite Jest Epic Read-along and have some nonfiction and adult titles I’m excited to read, so I might not get to all of these right away, but I can’t help but share some of these forthcoming young adult titles with you.

Seventeen-year-old Cat is living every teenager’s dream: she has her own apartment on the Lower East Side and at night she’s club kid royalty, guarding the velvet rope at some of the hottest clubs in the city. The night with its crazy, frenetic, high-inducing energy—the pulsing beat of the music, the radiant, joyful people and those seductive white lines that can ease all pain—is when Cat truly lives. But her daytime, when real life occurs, is more nightmare than dream. Having spent years suffering her mother’s emotional and physical abuse, and abandoned by her father, Cat is terrified and alone—unable to connect to anyone or anything. But when someone comes along who makes her want to truly live, she’ll need to summon the courage to confront her demons and take control of a life already spinning dangerously out of control.

Both poignant and raw, White Lines is a gripping tale and the reader won’t want to look away.

I’ve heard some people rail against YA set in the 80s because it’s out of touch with teens. Well, I love it. Eleanor and Park was delightful and I hope this is equally good. It’s no secret that I like my realistic fiction chock full of grit, so this one sounds promising.

In the Shadow of Blackbirds  by Cat Winters 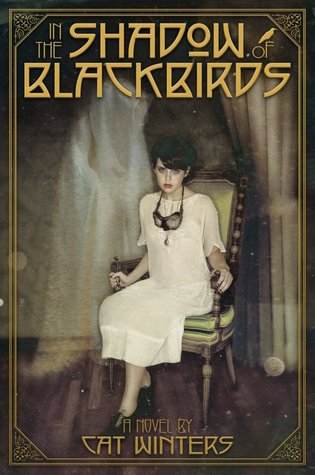 In 1918, the world seems on the verge of apocalypse. Americans roam the streets in gauze masks to ward off the deadly Spanish influenza, and the government ships young men to the front lines of a brutal war, creating an atmosphere of fear and confusion. Sixteen-year-old Mary Shelley Black watches as desperate mourners flock to séances and spirit photographers for comfort, but she herself has never believed in ghosts. During her bleakest moment, however, she’s forced to rethink her entire way of looking at life and death, for her first love—a boy who died in battle—returns in spirit form. But what does he want from her?

Featuring haunting archival early-twentieth-century photographs, this is a tense, romantic story set in a past that is eerily like our own time.

This sounds positively creepy in the best kind of way. I haven’t been sufficiently creeped out by any of the ghost stories I’ve read this year—Paper Valentine (review here) and The Dead and Buried (review here)—so I hope this delivers!

This is What Happy Looks Like  by Jennifer E. Smith 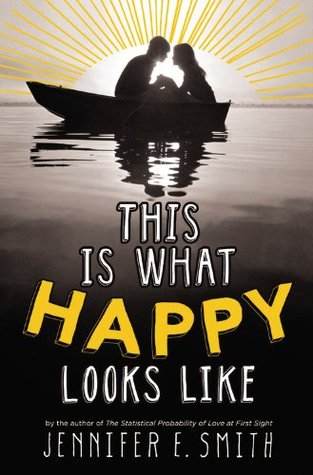 If fate sent you an email, would you answer?

When teenage movie star Graham Larkin accidentally sends small town girl Ellie O’Neill an email about his pet pig, the two seventeen-year-olds strike up a witty and unforgettable correspondence, discussing everything under the sun, except for their names or backgrounds.

Then Graham finds out that Ellie’s Maine hometown is the perfect location for his latest film, and he decides to take their relationship from online to in-person. But can a star as famous as Graham really start a relationship with an ordinary girl like Ellie? And why does Ellie want to avoid the media’s spotlight at all costs?

Okay, I’m kind of admitting my dorkiness here, but what girl didn’t have fantasies about her favorite television/movie/rock star falling in love with her? I’ve been underwhelmed by the last couple of contemporary novels I’ve read (The Reece Malcolm List reviewed here and Going Vintage reviewed here, to name a couple) so I hope I enjoy this one. I’ve heard good things about The Statistical Probability of Love at First Sight, so I’m thinking this is going to be cute.

The Eternity Cure  by Julie Kawaga

Allison Sekemoto has vowed to rescue her creator, Kanin, who is being held hostage and tortured by the psychotic vampire Sarren. The call of blood leads her back to the beginning—New Covington and the Fringe, and a vampire prince who wants her dead yet may become her wary ally.

Even as Allie faces shocking revelations and heartbreak like she’s never known, a new strain of the Red Lung virus that decimated humanity is rising to threaten human and vampire alike.

I accidentally requested, and was erroneously approved for, the Austrailian version of this on NetGalley. Thanks, Harlequin! I’ll be buying this series eventually, I’m sure. It’s one I recommend a lot at the library!

I Hunt Killers introduced the world to Jasper (Jazz) Dent, the son of the world’s most infamous serial killer.

When a desperate New York City detective comes knocking on Jazz’s door asking for help with a new case, Jazz can’t say no. The Hat-Dog Killer has the Big Apple–and its police force running scared with no leads. So Jazz and his girlfriend Connie hop on a plane to the big city and get swept up in a killer’s murderous game.

The aspect of I Hunt Killers I found least believable was how much the local police allowed Jazz access to the case and investigation surrounding the killings, so it’ll be interesting to see how Lyga explains and justifies a teenager being brought in by the FBI.

Sybella arrives at the convent’s doorstep half mad with grief and despair. Those that serve Death are only too happy to offer her refuge—but at a price. Naturally skilled in both the arts of death and seduction, the convent views Sybella as one of their most dangerous weapons.

But those assassin’s skills are little comfort when the convent returns her to a life that nearly drove her mad. Her father’s rage and brutality are terrifying, and her brother’s love is equally monstrous. And while Sybella is a weapon of justice wrought by the god of Death himself, He must give her a reason to live. When she discovers an unexpected ally imprisoned in the dungeons, will a daughter of Death find something other than vengeance to live for?

This heart-pounding sequel to Grave Mercy serves betrayal, treachery, and danger in equal measure, bringing readers back to fifteenth century Brittany and will keep them on the edge of their seats.

Although Grave Mercy was one of my favorite reads of 2012, I’m fuzzy on some of the details, so I’m glad that this seems like more of a companion novel rather than a sequel.

It seems I’m lame, and Quintana of Charyn comes out in April, Not March 23 like I had on my handy sequel calendar. So I’m definitely going to dedicate a couple days to savoring that in April. I’ve got loads of other books I’m excited to read. In fact, I could really use Herminone’s time turner so I have the opportunity to read them all!

What new releases are you most looking forward to?