Paper Valentine was one of my most anticipated reads of January 2013. When I first read the blurb for Brenna Yovanoff’s book, it appealed to me more than The Space Between, which I liked, an Th e Replacement, which I haven’t gotten around to reading yet but plan to some day. 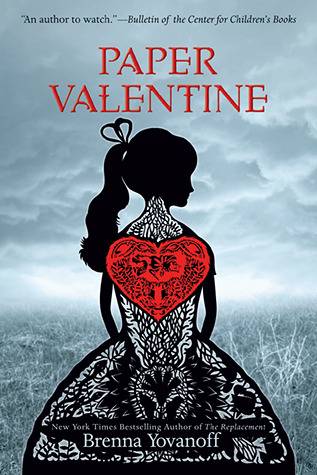 The city of Ludlow is gripped by the hottest July on record. The asphalt is melting, the birds are dying, petty crime is on the rise, and someone in Hannah Wagnor’s peaceful suburban community is killing girls. For Hannah, the summer is a complicated one. Her best friend Lillian died six months ago, and Hannah just wants her life to go back to normal. But how can things be normal when Lillian’s ghost is haunting her bedroom, pushing her to investigate the mysterious string of murders? Hannah’s just trying to understand why her friend self-destructed, and where she fits now that Lillian isn’t there to save her a place among the social elite. And she must stop thinking about Finny Boone, the big, enigmatic delinquent whose main hobbies seem to include petty larceny and surprising acts of kindness. With the entire city in a panic, Hannah soon finds herself drawn into a world of ghost girls and horrifying secrets. She realizes that only by confronting the Valentine Killer will she be able move on with her life—and it’s up to her to put together the pieces before he strikes again. Paper Valentine is a hauntingly poetic tale of love and death by the New York Times bestselling author of The Replacement and The Space Between.

Part ghost story, part murder mystery and part girl meets boy from the wrong side of the tracks romance, Paper Valentine was a book I enjoyed, though it never became more than the sum of its parts. Th blurb calls it a “hauntingly poetic tale of love and death” and while I agree with the first half, I’d say the story is as much friendship as love and death. Had more emphasis been placed on the ghost aspect of the story, which I found more compelling than the murder mystery, I would have enjoyed it more.

Hannah is haunted by her best Lillian, who died by starving herself to death. I felt like their relationship was much more fleshed out than Hannah’s crush on Finny Boone. When a serial killer slays a series of young girls, Hannah starts catching glimpses of even more ghosts — the ghosts of the dead girls. Lillian, who was obsessed with the murders even before her own death, prods Hannah to investigate the murders. Hannah doesn’t question why or how she’s been haunted for the past six months. She’s careful to avoid letting on her best friend is constantly hanging around, but with as omnipresent as the ghost is, I found that difficult to believe. The hows or whys of the ghosts communication are never explored, which left me slightly disappointed.

What worked between Hannah and Lillian was the dynamic of their friendship. Hannah feels guilty about letting Lillian waste away, though she did what she could to help her when she was alive—it just doesn’t feel like enough to her. Hannah feels a bit lost without the ringleader of her clique, and she is drifting off on her own, feeling disconnected from the rest of her group of friends. Lillian was the trendsetter, and because Hannah was her best friend, that made Hannah feel special. Through the novel she starts to come into her own personality and step out of Lillian’s shadow, even if Lillian is constantly hovering around. Lillian is not a likeable character, but she was my favorite. She had startling moments of insight, and wasn’t all that whiny about her lot in death or regretful of her past choices. She’s not very nice, but she’s not apologetic about it, either. Her brief moments of insight and her attitude about being undead made her an intriguing character for me, despite the fact that she was also an unsympathetic character.

A serial killer is on the loose. Since Hannah works at the photo shop where the police forensics photographs are processed, she has access to evidence (very conveniently). Because she has opportunity and Lillian is so obsessed, Hannah gets curious and starts looking into it. But the circumstances never felt that desire and the danger didn’t seem personal, so I wasn’t very invested in question of who the murder might be. Though the killings themselves were eerie and creepy, I never felt the danger like I felt the heat that Brenna Yovanoff painstakingly weaves into the setting. Though I think readers are meant to suspect Finny Boone, Hannah’s crush, I never quite believed he could be the killer. Since so few secondary characters were introduced and I didn’t think having a random killer would have made sense, it was fairly obvious to me from the beginning who was behind the murders—thought the motive was weak and the resolution lacking.

Finny Boone—well, Finnegan, as I wished Hannah would call him, because I detested the nickname—was not your typical bad boy crush. With bleach blond hair and a missing pinky, he’s a character that is easily distinguished from other love interests in YA novels. The attraction felt realistic, and I loved how the larger plot reflected the reality of romance—we can never know exactly how well we know someone. Brenna Yovanoff certainly can write lovely kissing scenes, but I wasn’t truly invested in Hannah and Finny’s relationship. It was all very run-of-the-mill teenage romance. I liked that Hannah was true to her feelings and allowed herself to pursue a relationship with a social outsider, but it lacked the epic quality that can make a reader’s heart soar when two lovers first kiss.

The story’s strengths are in it’s strange and unique details. I can totally picture some boy licking potato chips and throwing them at someone. The prose is atmospheric. The dead birds that keep popping up? Deliciously creepy. The murder scenes staged with discarded toys and paper hearts? Fantastically morbid. Yet they never are an important component of the plot so they fail to achieve any symbolic importance to the story. I wish all these elements had meant more, in the end, but the details themselves were much appreciated. Readers who enjoy the style of Brenna Yovanoff, who like girls with Alice in Wonderland charm bracelets, and who always want to sing Radiohead when they see fake trees in the middle of malls will enjoy this book. These kind of details and references worked for me, but I don’t imagine every reader will connect with the story this way. Brenna Yovanoff writes like an impressionistic painter. Certain elements are bright colors of description, but when you step back and look at the entire picture, you’re only left with an idea of what it is. Her stories are dreamy, and I enjoy that sort of style, but I think it works best in short story form (I highly recommend The Curiosities, which I reviewed here).

Luckily, I liked Hannah, so the novel feels worth reading for it’s main character and style if not for it’s plot. I can see how teen girls could relate to her insecurities and her hopes. She’s also got a quirky fashion sense (reminiscent of Blue in Maggie Stiefvater’s The Raven Boys, with her handmade and upcycled vintage outfits with tulle and charms, which is probably no coincidence since the two authors are friends and share a similar aesthetic). It’s good that I liked her, because we’re very much in her head for this close and intimate first person present narration. The novel feels very teen—the hours spent in the room, the interactions with parents, the liking a boy without knowing him, the dynamics between the friends. Brenna Yovanoff understands teen girls and writes for a young adult audience first and foremost. Fans of her work will enjoy this story, but I fear readers looking for a gripping thriller will be disappointed. I recommend Paper Valentine to fans of ghost stories and will suggest those interested in serial killers I Hunt Killers by Barry Lyga instead.

Publisher’s Weekly: “Yovanoff gives keen insight into friendship, sisterhood, and the stresses involved in being a teenage girl, in a painful but satisfying story that shows off the author’s gifts for writing dark contemporary fantasy.”

Mrs. Readerpants: “Though interesting and engrossing at times, I had too many issues with plot and character to get excited about Paper Valentine.”

I recieved an ARC through Netgalley from Razorbill/PenguinTeen.

One thought on “Ghosts and Serial Killers: Paper Valentine by Brenna Yovanoff”