Anytime I walk into the library and find a stack of shiny new ARCs on my desk, I am happy. Even if they don’t appeal to me personally, I get a kick out of thumbing through them and getting a taste for what’s coming out in the upcoming months. We often share them with the members of the teen book club who are voracious readers and love to read the newest thing. But one day this fall, I found a book that I thought must have been written just for me. 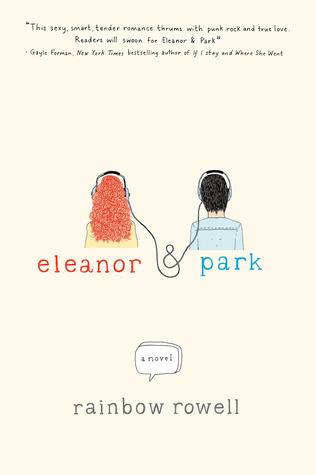 It’s 1986 and two star-crossed teens are smart enough to know that first love almost never lasts, but brave and desperate enough to try. When Eleanor meets Park, you’ll remember your own first love—and just how hard it pulled you under.

There really isn’t anything braver than love, is there?

Eleanor & Park by Rainbow Rowell is a very brave book, one that takes chances with tone, subject matter, and format. First off, I’m not generally a fan of prologues. But the sparse, 50 or so words that open this story, bookended by the the heartbreaking sentence “He stopped trying to bring her back” hooked me and set the tone for the book.

I could have easily been annoyed by the back and forth between Eleanor and Park’s point of view. I almost always hate alternating first person perspective, but since this was in third person, distinct voices weren’t necessary and I liked that every time POV switched it was marked with their name. This simple technique made it easy to follow the story. While I would have been obsessed with symmetry and the rhythm of the back and forth between the two characters if I’d tried to write something with this structure, the irregular length of each character’s passage and the short snippets punctuating longer sections really worked with this story. I was pleasantly surprised that this format enhanced the story, rather than detracting from it.

The characters are what really made this story resonate with me. As impossible as it is for her, with her outrageous thrift store clothes and curly red hair, Eleanor tries to be invisible. She has a lot of practice. For the last year, she lived with a friend of her mother’s because her stepfather kicked her out. Not wanting to test the goodwill of those who fed and sheltered her when her family would not, she was quiet and never asks for anything, never expecting anything. When the story begins she’s returned to live with her mother, stepfather, and younger siblings, and there is little sense of relief.

Park is a quiet Asian kid who wants nothing more than to be left alone and ignored by his peers. He doesn’t want the other kids on his bus to tease him, which presents a problem when Eleanor shows up on his bus, looking for a seat. A gesture of kindness will open him up to ridicule from the popular kids who live in his neighborhood. Though it pains him to do so and he is not exactly inviting, he slides over and allows her to sit next to him.

It starts slowly. He notices she reads his comics over his shoulder on the ride to school and stops finishing them when he goes home so she doesn’t miss the ending. He notices song lyrics doodled on her notebook, and lets her listen to his Walkman. And then, one day, he holds her hand.

And what a rush holding hands can be, especially when it’s clandestine. And even more so when you feel completely out of control of your own life, as if you have nothing that is your own except for those moments when your fingers are entwined with someone else who wants to hold on to you as much as you want to hold on to them.

I’m a romantic at heart. Not the cheesy rom-com kind of romantic; (though there’s nothing wrong with that kind, it’s just not me). I favor the epic, heart-wrenching kind of romance (this is probably in part because I have a very non-angsty romantic life myself—Mister BS is kind of awesome and our relationship represents 95% of my romantic experience).  But Rainbow Rowell has managed to perfectly capture what it feels like when you fall in love for the first time and that love is what saves you.

I have a lot of experience working with teens in the state system because they have abusive or neglectful parents, and also with survivors of domestic violence (I’ve worked at shelters that serve both populations). Rainbow Rowell has done a fantastic job of portraying both these heartbreaking scenarios in an authentic way. The combination of the subtle tactics and violent outbursts that Eleanor’s stepfather uses to exert his power and control over her are typical of an abuser. The broken and pathetic way that her mother acts is typical of women who have been convinced they are worthless by their abuser. The way Eleanor has adapted to survive — small things like taking a bath before her stepfather comes home from work or giving the money she was given at Christmas to her mother to buy food — are horrifying, but these type of coping mechanisms are the reality for many children trying survive in this type of an environment. I’ve seen a lot of novels that use these types of abuse scenarios as ways to inject a story with angst or generate sympathy for a character, and often they ring false and turn my stomach. Not so with Eleanor’s situation. She would hate your sympathy, but it is well-earned. Not only is her home life terrible, the bullying she experiences from her peers, particularly the girls in gym class, is also mortifying. The incidents let you feel Eleanor’s pain acutely, though she handles it all with more bravery than I could have ever mustered.

Park is the son of a veteran who met his wife in Korea and brought her home. His parents still make out (to Park’s horror) and are madly in love, even after all these years. But as stable and loving as his parents are, his dad is still very harsh on him. He won’t let him drive until he can master a manual transmission and freaks out when he wears eyeliner. He’s got a decent home life (at least compared with Eleanor’s), but is still an outsider. He needs her almost as much as she needs him.

So, against all odds, their romance blooms and unfolds into a tender kind of love. Park is sweet but never saccharine, and he manages to crack Eleanor’s protective shell. When so many young adult romances feature characters that are the Abercrombie kind of beautiful, I loved reading about the plump and atypical beauty of Eleanor and the slight and subtle allure of Park, who is punk rock without the pretense.

The ending felt rushed, and the event that sparked the conclusion felt contrived. But despite this, I loved the book, and I especially appreciated that Rainbow Rowell was truthful enough not to pretend that first love will always triumph (this isn’t a happily ever after; you know that as soon as you read the first page). As strongly as it affects us, and as important and life-changing it was for Eleanor and Park, adolescent romances rarely survive into adulthood, and it’s deceptive and bad form to instill these unreasonable expectations on young readers, in my opinion. It’s nice to have a realistic (but still touching and achingly good) romance to balance out all the fairy tales.

While is is very much a young adult novel, a coming-of-age story about the awkwardness of adolescence and finding your own identity and first love, I still feel it has strong adult appeal. Though there are a few teens that frequent my library who I know will love it, this will top the list when my adult friends ask me for a book recommendation. Anyone who loves music and pop culture references in their fiction will enjoy Eleanor & Park, but those in their late twenties through early forties will probably most enjoy these elements.

I loved this so much, I immediately went and checked out Attachments, Rowell’s first novel, an adult love story about two friends whose emails are read by the internet security officer and are so compelling, he falls in love with one of them. What a cute premise, right? Then, when I realized that Rainbow Rowell had another young adult coming out in the fall, all about being a fangirl and thus titled, Fangirl, I may have had a fangirl moment of my own. The brief blurb suggests this is about a girl who writes fanfiction, and I am like “why hasn’t this happened yet!?” because YES.

Fans of Perks of Being a Wallflower by Stephen Chobsky and If I Stay by Gayle Foreman will enjoy Eleanor & Park, which also has endearing, realistic characters and strong musical elements. Want a second opinion? Check out Novel Sounds review complete with references to songs by The Smiths.

*I received an advanced readers’ copy from St. Martin’s Press via my library.