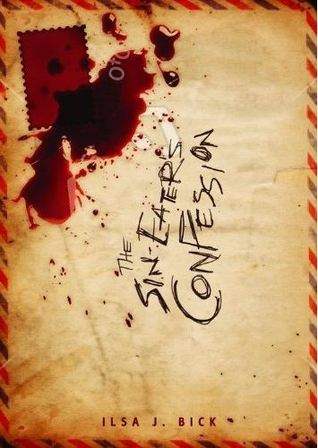 The Sin-Eater’s Confession by Ilsa Bick

I guess you could say I knew Jimmy as well as anyone (which was not very well). I knew what scared him. And I knew he had dreams—even if I didn’t understand them. Even if he nearly ruined my life to pursue them.

What I don’t know is if I can trust my own eyes. I don’t know who threw the stone. Who swung the hatchet? Who are the shadows? What do the living owe the dead?

My thoughts: This book had my heart racing and forced me to stay up late into the night turning the pages until I reached the end. It was darkly fascinating. I was spellbound.

Ben is now a medic in the Armed Forces serving in Afghanistan, but once, he was a driven teenager from rural Wisconsin with dreams of the Ivy League. Something happened his senior year that rocked his hometown and changed his life plans. Something that is weighing heavily on his soul, prompting him to write a letter explaining his part in the tragedy. Bick’s choice of this set-up rather than a straight narrative of the events is deliberate, and what made the story work for me. Ben’s voice as he explains to the reader and the recipient of the letter is one of someone who has frantically obsessed over these events. He’s convinced himself of what happened to the point where his truth is subjective. It recalled the same foreboding feeling I got reading Poe’s short stories for the first time. This narrator is unreliable, be sure. We get all of Ben’s internal thoughts and a front row seat to his justifications and decision-making process, but that makes them even more suspect. Bick’s background as a child psychologist is put to good use, because I feel immersed in Ben’s mind.

Ben befriends a younger boy, Jimmy, after his older brother dies and the family needs help on their farm. He milks cows ands hauls hay, and one afternoon, takes his sweaty shirt off and naps in the hay loft. Jimmy snaps a photograph of him that happens to be very sensual. The photo wins a national photography contest and appears in a magazine, and changes Ben and Jimmy’s lives forever.

I can attest that there are dark corners of this country in which people still think homosexuals should burn in hell, and this is the kind of town that Merit, Wisconsin is. It’s not even okay to be thought of as being tolerant of that sort of lifestyle, let alone be openly gay. I’m not one to want to put a blanket judgment on rural areas as small-minded and bigoted, but I don’t want to romanticize these picturesque country towns with their ultra-conservatives, either. I’ve lived it and witnessed it myself. Small towns can be mighty intolerant of those who are different, and Jimmy was definitely different. He’s an artist but a bit manipulative, though readers do not get to know him well and only see him through Ben’s eyes. As perfect as Ben had tried to construct his persona as a volunteer at the hospital who always got good grades, he was not a good person, he didn’t do the brave thing and stand up for his friend.

I think this is an important contribution to queer YA literature, because it takes a point-of-view that I haven’t seen done before. It’s not about coming out and it’s not a romance and it isn’t afraid to remind teens that were born the year that Matthew Shepherd was murdered that they were born into a world where that kind of hatred exists.

There are plenty of readers who won’t get on board with an unlikeable main character. They want a hero who may be conflicted, who may even have dark tendencies with which he must battle, but they still want a character who will make the right choice at the critical moment, who will save the day. I think it’s delightfully interesting to peek inside a character who is conflicted, who may have good intentions, but it still too selfish to do the right thing. That’s why I loved The Sin-Eater’s Confession, and many will not.

Reading Between Classes: “Firstly, the main character was despicable.  He was unlikeable, cowardly and an all around lame-ass human being…The writing featured a great deal of conjecture in the main character’s head.  This was boring. repetitive and, ultimately, pointless.”

Annette’s Book Spot: “The inner dialog is realistic and heartbreaking. Everything gets worse when he witnesses some violence and does nothing about it.”

In Bed With Books: ” It’s got a great voice and raises some interesting questions, but it’s pretty messy.  Recommended for fans of unsolved mysteries and LGBTQ themes.”

The Bookaholic: “The Sin-Eater’s Confession is thought provoking. There are underlying messages and it’s rather sad throughout when I think back about it. The overall subject is important. I read through it quickly, intrigued from the first page. But unfortunately, I can’t say I fully enjoyed reading the book.”

8 thoughts on “A Different Kind of LGBTQ Book: The Sin-Eater’s Confession by Ilsa Bick”