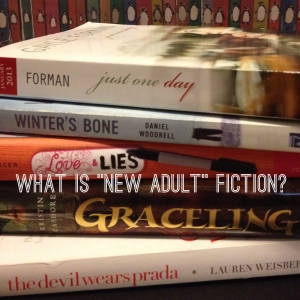 While my first post was my ramblings about what other people say New Adult books are and what I want New Adult books to be, this is the part where we talk about actual, real life, books.

There was no systematic way in which I picked these. Some are books I’ve already read and thought might have some aspects that were New Adult-ish and others were ones I read specifically because people were talking about them as New Adult books. I’m looking at three things in my discussion: characters & conflict, style & tone, and the sex factor.  These are the three main axises on which I plot New Adult fiction. These are my own, personal, subjective judgments about the books. In some cases I’m playing devil’s advocate, because that’s how I roll. But I just want to illustrate a point about the way we frame discussions about books and the labels we give them.

This is a self-labeled New Adult novel that grew out of self-publishing and was a runaway hit. Many reviewers that I follow enjoyed it. I kind of thought “meh.”

Characters & Conflict: It’s set in college and follows a girl dealing with the consequences of attempted rape and falls in love with her rescuer/teacher’s assistant. I found it contrived and too textbook and PC in its treatment of rape and its aftermath and effects. Both the characters and the plot felt predictable, and while it was a quick easy read, I would have DNF’d it so fast if I hadn’t been reading it for this specific purpose.  But if the overwhelming positive response to this from bloggers is any indication, there is a niche market for this type of college romance.

Style & Tone: This felt much more like contemporary romance than YA. The writing was straightforward. To me, it didn’t read like YA (though we shelve it in YA at my library).

The Sex Factor: As far as the heat level of the sex scenes, they were more explicit than most YA and definitely seemed designed to titillate rather than explore character or further the plot. I’m certainly not prudish, but I didn’t think they contributed to my enjoyment of the novel. There’s some heavy petting where the protagonist is brought to orgasm while she is still wearing jeans. It was really awkward. While I wasn’t a big fan of this, a lot of people were.

The Marriage Plot  by Jeffrey Eugenides

While this is “literary fiction”, could it not also be “new adult”?

Style & Tone: So this is about as far away from YA as you can get. This is a pretentious book that presumes you’ve read Derrida or makes you feel slightly stupid if you haven’t. This doesn’t mean it might not have appeal for teens—I loved The Virgin Suicides in high school and Middlesex in college.

The Sex Factor: While there is a lot of discussion of sex and depiction of sex in this book, none of it is titillating. It’s frank and adult and not sexy.

The Last Summer (of You and Me)  by Ann Brashares

Ann Brashares wrote the YA series The Sisterhood of the Traveling Pants, and this is her adult novel. My love for it is infinite.

Characters & Conflict: Two sisters grew up on Fire Island next door to a boy. Now they are all college-aged and boy returns for one summer. Younger sister is in love with him, older sister is his best friend. This is a story about family and loyalty and love.

Style & Tone: I haven’t read Brashares’ YA for comparison, but this does have a mature, literary quality to it without being inaccessible. There were layers of irony that I appreciated. It read as very adult to me, but I still think it has great appeal to fans of YA. To me, this is quintessentially New Adult. It’s more than YA, but because of the first love childhood friendship angle and the family drama it  didn’t read like a typical contemporary romance, either.

The Sex Factor: This is not much steamier than steamy YA. It’s got some sex scenes, but they are tasteful and important to the actual plot of the story.

I recently read this as part of the Hub Reading Challenge, and thought I’d include it because there has been speculation that a lot of the recent YA fiction that deals with veterans of recent wars might fit under a New Adult umbrella.

Style & Tone: Though the main character is out of high school for most of the book and it deals with some heavy issues, it’s a short, quick read that feels very YA. This kind of novel would feel overly sentimental had it been done for the adult market and for me, the brief impressions of characters and series of scenes wouldn’t have worked had it not had the YA tone.

The Sex Factor: None.

I was curious about this pull-to-publish fanfiction thing. And I got an ARC.

Characters & Conflict: The hot intern gets it on with the boss. She is in college.

Style & Tone: This reads like fanfiction, because that’s what it is. There is no backstory, no set up, no development of secondary characters. the style and tone is much closer to contemporary romance than anything in YA.

The Sex Factor: This is erotica. The couple have sex in every which way possible every chapter.

A Hidden Fire  by Elizabeth Hunter

This is one of the few independently published series I’ve enjoyed. The author classifies it as urban fantasy/paranormal romance, but it features a college student as a protagonist.

Characters & Conflict: Together, Gio, a vampire, and Beatrice, a student who works in an academic library, unravel a century old mystery.

Style & Tone: As much as this is about mystery and romance, it’s also about friendship and family and growing up and deciding what you want out of life. It’s more layered than a typical paranormal romance.

The Sex Factor: I felt like Goldilocks reading this, because the amount of sex was “just right” in my opinion. There’s a lot of sexual tension and I was invested in the characters by the time they finally got together. The romance didn’t overwhelm the mystery and action of the story.

I could discuss several more titles, but for now I’ll leave it at these six. Two—Easy and Somebody Please Tell Me Who I Am— are shelved as YA. One is an adult title by an author who also write YA—The Last Summer (of You and Me).  One is erotica—Beautiful Bastard. One is solidly literary fiction (and there has been much discussion about it with regards to women’s fiction, a label I find infuriating)—The Marriage Plot. One is self-published and NOT contemporary—A Hidden Fire. These books are widely different from each other. They all feature college-aged protagonists and all but one deal with sex, but vary widely in style and tone.

New Adult right now is an ill-defined concept that may or may not become a “thing.” I’m ambivalent about it, because I don’t want to see it used solely as a way to discuss extra-sexy YA and I do think there is a gap in the literary adult fiction market and I would personally like to see more fiction that feature 20-something characters. I don’t want to see a trade off with YA, where there’s a push in the market to cater to adults who read YA rather than teens.

So, what do you see “New Adult” fiction as? Does this label describe or help you find books you’d like to read? What titles do you think fall somewhere on this New Adult spectrum?