One night about a month ago, I was looking through my personal tumblr and the LPL’s tumblr looking for a booklist I knew I had seen and thought I had reblogged in one of the two places, but alas, I couldn’t find it. 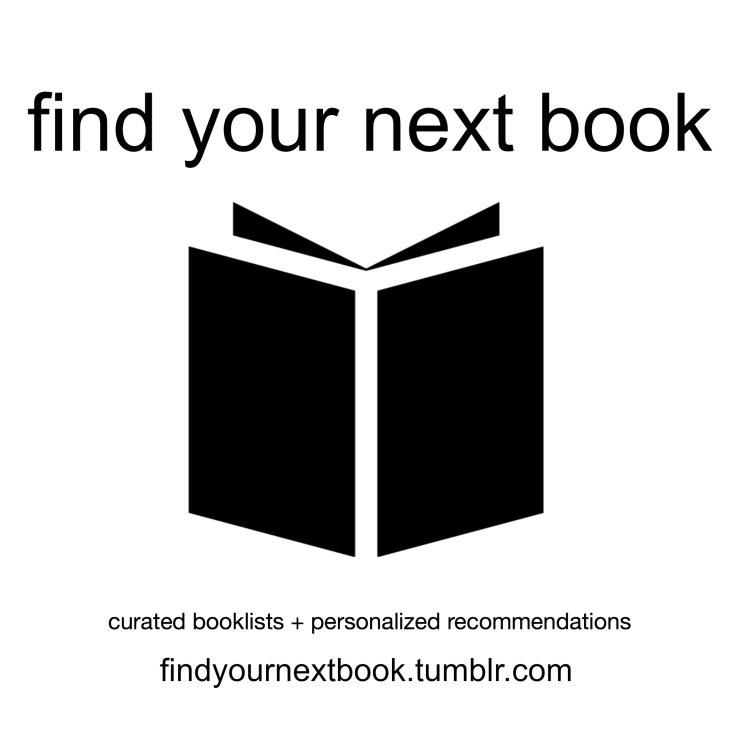 This is how the Find Your Next Book tumblr was born. I wanted one place that was just booklists and only booklists, where I could organize them with appropriate tags, saving the ones I’ve made myself and ones I’ve found on other tumblrs. Like any good librarian, I would have controlled vocabulary so I could easily locate a booklist on a topic or genre with ease.

I reblogged the original post explaining the project onto my personal tumblr (with nigh over a thousand followers – not exactly the whole internet), did a quick series of reblogs of recent content I’d made and found, queued it all up, and went to bed, pleased with the project that I’d done while Mister BS and I watched episodes of Arrow on Netflix (which is terrible and addictive).

Then a strange thing started happening. Not only were people starting to follow the tumblr, which I had intended just as a personal repository that might be useful to a few other librarians, but lots of them were also asking for personal reading recommendations. Hey, I love helping people find the right book! It’s my job! I started answering the asks.

And they just kept coming in. Right now there are over 15,000 followers (which, to be fair, is still not a lot, I think — Go Book Yourself has 150,000, for example) and at least 150 requests for book recommendations waiting to be answered. Some are boring and could easily be answered by a quick search and don’t give enough detail as to what specifically they are looking for, but some are interesting and complex and force me to stretch my readers’ advisory muscles. So it’s kind of fun.

What has been interesting, at least to me, is how comfortable people are with asking a complete stranger on the internet for help finding a book, rather than asking their local library.

I also run the tumblr for my public library, and after about two years growing a following, we have about 5,000 followers, many of whom are actually local to Lawrence. But we also have connected with literature and library lovers across the world. But it took a lot of work to gain that, whereas in just two weeks, I’d tripled that for Find Your Next Book with absolutely no effort.

On the library’s tumblr, I sometimes put out a call for personalized book recommendations, inviting people to use our ask box. And there are usually a couple of people who submit a request, but no where near the volume I get through Find Your Next Book.

Pew Research shows that libraries are the most trusted public institution, beating out the military, unions, teachers, and of course, Congress.

So why don’t more people want to ask librarians for book recommendations?

I know that lots of people do, in fact, ask librarians for book recommendations. My mom had surgery last week, and while she was in recovery one of the nurses was chatting with me and said, “Your mom said you are a librarian. Are people always asking you for book recommendations?” The way she said it was sort of sheepish, like how annoying that must be. Maybe people are always asking her about nursing related stuff and it bugs her.

I explained that helping people find books they’ll love is actually my favorite part of my job.

So she asked if I had any suggestions for fans of Nora Roberts. While this is out of my comfort zone, I had done a list for the library on romantic suspense, so I rattled off two authors for her to look into: Julie Garwood and Suzanne Brockmann, with the disclaimer that it wasn’t my area of expertise. But, while talking, it seemed like she really liked her style of descriptive writing, and the suspenseful books weren’t actually her favorites, she liked more romantic stories that were a bit funny and moving. So I gave another, less obvious suggestion, based on my own taste, and recommended Liza Palmer.

My library is revamping our readers’ advisory services (more on that later), and so this accidental experiment has been really eye-opening and thought-provoking. I don’t know that I have any more answers, but I’m excited about this project and all the practical experience I’m getting actually doing readers’ advisory.

5 thoughts on “Find Your Next Book: Readers’ Advisory on Tumblr”