I am not exactly a Divergent fan. I really admire Veronica Roth and think she’s a competent writer, but the story and world-building of the series do not appeal to me. I feel the same way about Lauren Oliver. I think she is a decent writer and has a great eye for the type of story that will do well in the young adult market, but I don’t actually like any of her books as a reader. But I digress.

My opinions don’t really matter. Divergent has been consistently at the top of the high demand list at the library for months. It also has the highest number of holds of any ebook in the Overdrive Consortium to which my library belongs. The movie came out this week, which happens to be Spring Break. It’s a great event to build a program around. I don’t think it’s quite reached the level of success and fervor that The Hunger Games did, but there’s still a lot of buzz surrounding it, at least at my library.

Luckily, I think that Divergent is a really programmable book. We came up with lots of ideas for library programs for teens we weren’t even able to use. We made bleach pen stencil t-shirts and glass bubble magnets for our craft, had trivia, did a faction sorting quiz, and played some games.  (At the end I’ll share ideas and links for other programs related to Divergent). 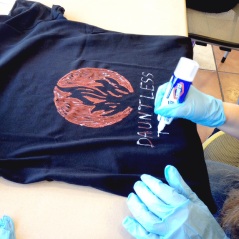 Mister BS traced the faction symbols onto mylar and acetate. Both the thin and flimsy material and thicker and sturdier material worked equally well and held up to multiple uses. If you want to let kids cut their own stencils, you can. Just have exacto knives on hand and allow for at least fifteen minutes of time. Freezer paper or contact paper also works for making stencils. Instead of bleach pens, you can also use bleach in spray bottles, although I suggest doing this outdoors. The spray bleach method also has a higher likelihood of ruining the clothes you’re wearing, so an apron, smock, or other protective gear might be a good idea.

These all turned out really well. The bleach pen turns a black t-shirt a copper shade, so the dauntless faction symbol with quotes like “be brave” written on them looked especially good! But I was happy that all the faction symbol stencils we (I mean Mister BS) made were used at least once, though Dauntless was the most popular. 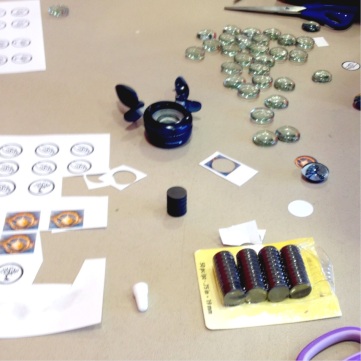 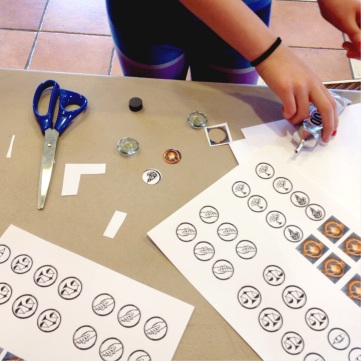 I loved this craft! It would be fun to do with comic books or scrapbook paper or little hand drawn doodles. For our programs, I printed the faction symbols and the fiery swirl from the book cover on cardstock. We found the glass beads at the dollar store. Definitely a good deal. You can also buy these Clear Glass Tiles

(which we did but saved for a future program). You need little magnets, and it’s also helpful to have a circle puncher like this Fiskars Circle Squeeze Punch

which I personally own and brought to use at the program. I prefer E6000® Craft Adhesive.

You simply apply it to the flat side of the glass bubble, then stick on the paper that you’re using, then apply another dot of glue and the magnet. It’s super easy, and teens like them for their lockers. It’s a fun way to use scrap paper or weeded graphic novels.

As much as I love crafts, for bigger programs, we like to do a wider array of activities.

We did Divergent faction trivia and a Divergent Faction Sorting Quiz (modeled after those old Seventeen magazine quizzes where each answer is assigned a numerical value and you add the total to determine which category you fall into. I read a number of Divergent quizzes online to get ideas for questions and made the scale in a very scientific (actually quite random) way. After teens determined their faction or that they were “divergent” they got a sticker to designate their faction. It led to an interesting conversation about which faction teens had assumed they fell into or that their friends would be in. We also did a simple trivia based only on the first book, and though there were a few challenges, most everyone got them all right.

We also planned to play “fear landscape charades” though the teens were shy and didn’t take to the idea. This was supposed to be a game where they acted out a fear they had. Even cooler, this idea for a live-action fear landscape simulator sounds awesome, but it wouldn’t work in our current, temporary space.

Other ideas included a modified “would you rather” game, or “two truths and a lie.” You could also take a list like this one from BuzzFeed of 75 things that are so crazy they seem false but are actually true and have teens guess which one are lies (though none are).

If you have the people and space, a game of capture the flag could be fun.

You could write letters to soldiers, people in assisted living facilities, people in hospice, etc.

You could make terrariums (a popular program we’ve done before).

If I hadn’t already done a Divergent photo shoot program and have plans to do green screen programs when we open in our new library with a new recording studio, or an activity where teens could get their pictures taken “jumping” off buildings or trains would have been fun.

After reading several tutorials, DIY temporary tattoos was ruled out as a possible program because it seemed expensive, messy, or not that cool.

You Got to Have Snacks

Programs with food are popular. For this one, I made dauntless chocolate cupcakes (from scratch, saving about 75% of what it would cost to order from a grocery store or bakery) and we also had cuties, bananas, and apples on hand for some healthy options.

For each activity they participated in, a teen was entered into a prize drawing for a $25 gift certificate to our local movie theater. It was fun and the winner was very excited. Other prize options could be posters, swag, or books if you had them available.

Overall, the program was a success. We had both regulars and new teens attend. I even noticed two girls exchanging email address at the end of the program! Seeing kids make new friends has got to be one of the best parts of my jobs.

I always try to put out some books at programs, and luckily technical services had just cataloged and processed Divergent Thinking and The Divergent movie guide. I also printed off copies of my Divergent faction reading list for teens to check out while they were entering their names in the prize drawing.

Find even more Divergent library program ideas and links on my Pinterest board.