Carter Finally Gets It by Brent Crawford 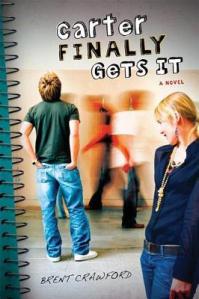 Colleagues had highly recommended this one, especially for guys who want a funny, realistic book. I get the humor, and perhaps it would have been different had I not tried the audio…but Carter’s mind was just painful to be in. I just didn’t want to hear his completely embarassing internal monologue, especially when he started thinking about girls. Nick Podehl is a much celebrated narrator, but I find his style to be a little over-the-top.  I definitely can understand the appeal of this. It’s full of crude humor and frank discussion of boobs and sex. I just couldn’t quite stomach it personally. I only got about 20% through the audiobook and had to give it up.

Abby the Librarian: “This is a book that definitely straddles the line between tween and teen and for some guys it will be exactly the kind of book they need.  It’s a funny, enjoyable book about a guy who’s going through much of the same stuff they’re going through and who’s giving them hope that they’ll figure it out someday, too.” 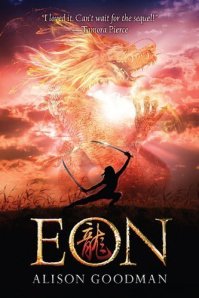 really thought I was going to LOVE this one. Epic fantasy, kick-ass heroine, complex world-building, and thoughtful commentary on gender? Everyone I know raves about this book. Fellow bloggers, librarians, teens in the library. Everyone.

But I got about 60% through the audiobook and bailed. I did not enjoy the narrator, and the story was just dragging out f-o-r-e-v-e-r. This might be one I’d considering trying again in print since it’s so well-loved.

April from Good Books Good Wine: “And this, my friends, begins Goodman’s sweeping Asian-inspired fantasy novel Eon: Dragoneye Reborn. I inhaled this 536 page book in the course of two days. As intrigues unfolded, battles raged, and secrets were reveled, I held the book in almost a death grip, eyes glued to the page.” 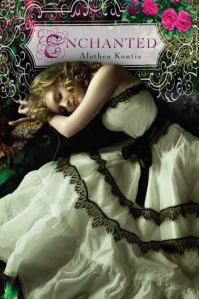 I picked this one up (like the others) because it was available on MP3 CD from my library, but I also thought I’d give it a try because it was on YALSA’s Top Ten Best Fiction for Young Adults list this year. I thought it was completely predictable and juvenile and couldn’t get past the first few chapters. This didn’t feel like anything I could sell to readers at my library and was frankly, boring. I’m always suprised by a few titles on awards lists, and this one that I just couldn’t see as one of the top ten titles released for teens in the past year. I’ve read reviews from others who were similiarly disappointed, but I know others who thought it was great. Perhaps I didn’t get far enough? Still, I’m not tempted to investigate further.

Kimberly at STACKED: “I liked that Kontis used The Frog Prince as her springboard but did not limit herself to a mere re-telling. By that I mean she created a new mythology with new magic, injecting some originality into these very old stories.”

Not every book works for every reader. Since I read in a wide variety of genres, I’m bound to encounter books that aren’t for me. Especially since I’ve been listening to so many audiobooks, I’ve got a lot more DNF reads lately, and Book Breakups gives me a way to discuss them without sharing a full review.