With a focus on family as much as first love, and a diverse cast of characters, this is a stand out young adult novel. 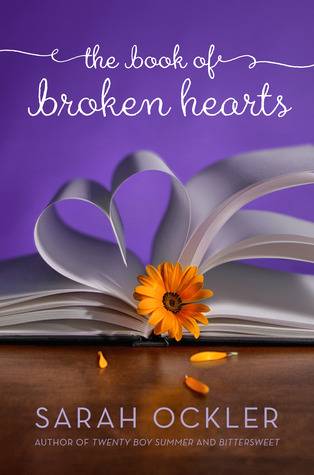 The Book of Broken Hearts by Sarah Ockler

Synopsis (Goodreads): When all signs point to heartbreak, can love still be a rule of the road?

Jude has learned a lot from her older sisters, but the most important thing is this: The Vargas brothers are notorious heartbreakers. She’s seen the tears and disasters that dating a Vargas boy can cause, and she swore an oath—with candles and a contract and everything—to never have anything to do with one.

Now Jude is the only sister still living at home, and she’s spending the summer helping her ailing father restore his vintage motorcycle—which means hiring a mechanic to help out. Is it Jude’s fault he happens to be cute? And surprisingly sweet? And a Vargas?

Jude tells herself it’s strictly bike business with Emilio. Her sisters will never find out, and Jude can spot those flirty little Vargas tricks a mile away—no way would she fall for them. But Jude’s defenses are crumbling, and if history is destined to repeat itself, she’s speeding toward some serious heartbreak…unless her sisters were wrong?

Jude may have taken an oath, but she’s beginning to think that when it comes to love, some promises might be worth breaking.

My thoughts: First off, I want to talk about the cover. I pretty much think it’s terrible. I rarely discuss the book’s cover in reviews, but I do think a review can be about the entire package and I feel strongly enough about this cover to discuss it. I have a personal issue with that shade of purple going back to childhood trauma involving glitter at the hands of my gifted facilitator in elementary school who was obsessed with the color, so that was the first strike against it. I get the book/heart stock photo goes with the “book of broken hearts” but I really don’t feel it captures the feeling or tone or the “aboutness” of the book AT ALL.

Here’s what I pictured after reading it: blue-grey background, a winding road, and a motorcycle.

I loved this book, and I really felt like the cover did the book a disservice. It’s uninspired and makes it seem like the book is an overly sentimental romance when it’s really about so much more. Gendered covers can alienate a large segment of readers and reinforce stereotypes and  I wish marketing departments in publishing houses would stop going for the least common denominator when they design book covers.

Despite the awful cover, I really enjoyed the book. While there is a great romantic storyline, the core of the novel is about family. Jude’s relationships with her father and her sisters are the driving force of the plot. They are a tight-knit Hispanic family—Jude’s parents emigrated from South America—and I loved the realistic portrayal of a family who speaks Spanish at home and my mouth was watering at all the empanadas they were constantly eating. Jude’s relationship with her father was touching and moving and the dynamic between the sisters was complex and nuanced.

Jude’s sisters are older than her, and one has always bossed her around, and she’s always looked up to both of them. She’s determined to make them proud by doing a good job taking care of her father over the summer.  Jude’s father has early onset Alzheimer’s and his condition has been worsening.

Jude’s big idea to connect her father with his memories is to fix up his old motorcycle from his life in Argentina before he moved to the US. Their summer project is designed to keep him busy and active, but requires the help of a professional mechanic, too.

Enter Emilio Vargas. One of those Vargases, from a family of heartbreakers. Two of his relatives have devastated Jude’s older sisters and they made Jude agree to a pact to never get involved with a Vargas boy.

But really, their relationship is based on friendship, at least at first. Though he’s a charmer, Jude is reluctant to admit her own feelings. It’s sweet and endearing and I loved watching their love blossom.

As much as I enjoyed Emilio and Jude’s scenes, it was Jude’s father who captured my heart. Too few YA novels showcase teens relationships with their parents, and this one is well-executed.

I highly recommend this books to fans of young adult contemporary stories. I was so happy to discover a beautiful story of family, friendship, and love, especially since it features an immigrant family.

Heather at The Fly Leaf Review: “…The Book of Broken Hearts is about a family. It’s about love and loyalty between sisters. But more importantly it’s about the ties between a daughter and her failing father and the lengths that she will go to to make what remains of his life a happy one. “

Keertana at Ivy Book Bindings: “The Book of Broken Hearts has a lot to love, but perhaps my primary reason for falling head-over-heels for this book is the very fact that Sarah Ockler explored the life of an immigrant family. One of the best aspects of this, though, is that it is never over-done. Instead, Jude’s heritage feels natural and the brief glimpses into a past in Central America and the struggle of learning English in a new country is enough to cement the diversity this novel provides.”

8 thoughts on “The Memory of a Motorcycle: The Book of Broken Hearts by Sarah Ockler”