Top Ten Tuesday is a book blogging prompt hosted by The Broke and the Bookish. I don’t participate every week, but I join in when I find the prompt interesting. This week’s prompt is beach reads, interpreted as we see fit. I’ve included some traditional “beach reads” and some not-so-usual picks. 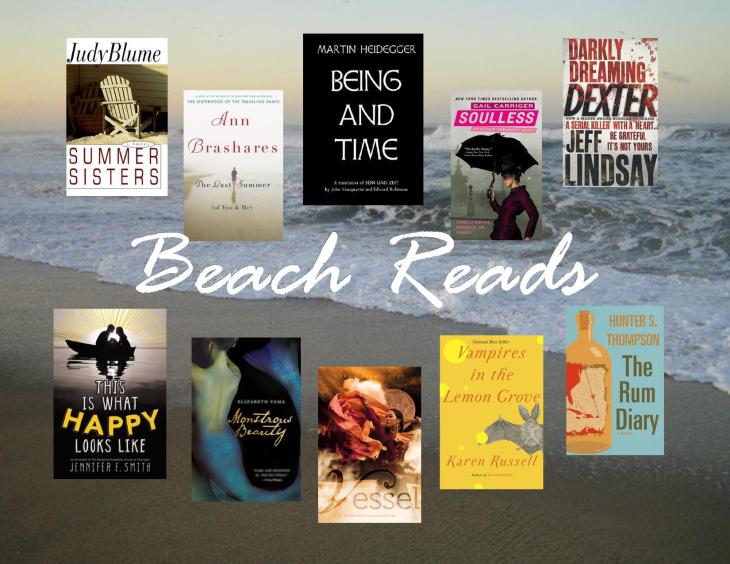 Summer Sisters by Judy Blume | The Last Summer (of You and Me) by Ann Brashares | Being and Time by Martin Heidegger | Soulless by Gail Carriger | Darkly Dreaming Dexter by Jeff Lindsay | This is What Happy Looks Like by Jennifer E. Smith | Monstrous Beauty by Elizabeth Fama | Vessel by Sarah Beth Durst | Vampires in the Lemon Grove by Karen Russell | The Rum Diary by Hunter S. Thompson

What makes a good beach read?

It depends. I’ve included several books set in a beachside locale, which is always a good choice for seaside reading. I read Summer Sisters while vacationing in Half Moon Bay, California, and it was a perfect beach read. Though I’ve never read any of Judy Blume’s YA, this story of two girls who spend their summers vacationing together through adolescence and into adulthood hit many of my sweet spots as a reader. The Last Summer (of You and Me) is another adult book by an author most well-known for her YA series, and is also set at the beach, but it made me bawl my eyes out, so if you want something light, it might not be for you.

If you want fun genre fiction, I recommend Soulless, because vampires and werewolves and Victorian steampunk—you just can’t go wrong.  The Dexter books are another easy choice. They are kinda fun even though the TV show is much smarter. This series  is entertaining enough but you can put them down when it’s time to go snorkeling.

This is What Happy Looks Like is the ultimate in YA romantic fluff, which is not normally my thing, but would be perfect for the beach as it is also set in a seaside town. If you’re more into horror (or audiobooks) Monstrous Beauty is engrossing (I’m listening to it now). Vessel is an awesome fantasy that takes place in the desert—which isn’t the same as the beach, but they both have sand, and I wanted a fantasy book on this list.

If you want short stories that will occupy you for a time but afford you breaks for other beachy activities, check out Vampires in the Lemon Grove. These stories are cheeky yet literary, which is hard to pull off. If you are looking for a book to go with my favorite beachtime activity, boozing, The Rum Diary is perfect. I can’t drink rum, sadly, due to unfortunate incidents with pints of Bacardi during high school, but the Puerto Rico setting and journalist plot line is highly entertaining even for those who prefer gin in their cocktails.

I’m probably in a very small minority of this, but I also like the irony of reading dense philosophical texts when laying under an umbrella on warm, white sand. In fact, I was first introduced to the concept of a “beach read” on a family vacation to Key West when my aunt said of my selection of philosophy texts I had brought on the trip, “great beach read.” She was being sarcastic, but I didn’t realize that at the time, and I still think Being and Time is the perfect text to contemplate on the beach.

What are your favorite beach reads?