Summer reading kicks off at my library today! Working at the library is so much fun during the summer because we have a ton more programs and kids have more time to read so I get to do a lot more of my favorite aspect of my job: reader’s advisory. To celebrate I thought I’d spotlight some 2013 releases that are perfect for summer reading—they all have summer in the title. (I received ARCs from the publisher of the first four titles).

The summer we were nine: Emma was branded “Skylar’s friend Emma” by the infamous Adam Loring…
The summer we were ten: Maddie realized she was too far into her lies to think about telling the truth…
The summer we were eleven: Johanna totally freaked out during her first game of Spin the Bottle…
The summer we were twelve: Skylar’s love letters from her boyfriend back home were exciting to all of us—except Skylar…
Our last summer together: Emma and Adam almost kissed. Jo found out Maddie’s secret. Skylar did something unthinkable… and whether we knew it then or not, five summers of friendship began to fall apart.

Three years after the fateful last night of camp, the four of us are coming back to camp for reunion weekend—and for a second chance. Bittersweet, funny, and achingly honest, Five Summers is a story of friendship, love, and growing up that is perfect for fans of Anne Brashares and Judy Blume’s Summer Sisters.

I had an ARC of this and saved it for a trip to visit my brother in LA, as it seems like the perfect beach read. I haven’t read Brashare’s YA series, Sisterhood of the Traveling Pants, but I adored her adult novel The Last Summer (of You and Me). Judy’ Blume’s Summer Sisters is another favorite (I’ve also never read her YA novels, coincidentally!) I love the idea that this shows friends at different ages. It seems right up my alley, and I’m going to take it to my favorite beach Malibu.

Check out Morgan’s review at Nothing Better than a Books or Jaime’s review at The Perpetual Page Turner.

The Summer I Became a Nerd by Leah Rae Miller

On the outside, seventeen-year-old Madelyne Summers looks like your typical blond cheerleader—perky, popular, and dating the star quarterback. But inside, Maddie spends more time agonizing over what will happen in the next issue of her favorite comic book than planning pep rallies with her squad. That she’s a nerd hiding in a popular girl’s body isn’t just unknown, it’s anti-known. And she needs to keep it that way.

Summer is the only time Maddie lets her real self out to play, but when she slips up and the adorkable guy behind the local comic shop’s counter uncovers her secret, she’s busted. Before she can shake a pom-pom, Maddie’s whisked into Logan’s world of comic conventions, live-action role-playing, and first-person-shooter video games. And she loves it. But the more she denies who she really is, the deeper her lies become…and the more she risks losing Logan forever.

So I am not always in love with Entangled Teen’s books, but I think it’s great that they are so clearly written for a teen audience, and this one is about NERDS so I’m thinking it might actually be a hit with me.

How My Summer Went in Flames byJennifer Salvato Doktorski

First she lost her heart. Then she lost her mind. And now she’s on a road trip to win back her ex. This debut novel’s packed with drama and romance!

Rosie’s always been impulsive. She didn’t intend to set her cheating ex-boyfriend’s car on fire. And she never thought her attempts to make amends could be considered stalking. So when she’s served with a temporary restraining order on the first day of summer vacation, she’s heartbroken—and furious.

To put distance between Rosie and her ex, Rosie’s parents send her on a cross-country road trip with responsible, reliable neighbor Matty and his two friends. Forget freedom of the road, Rosie wants to hitchhike home and win back her ex. But her determination starts to dwindle with each passing mile. Because Rosie’s spark of anger? It may have just ignited a romance with someone new…

Road trip books are perfect for summer! This permise seems unique and I’m definitely checking this out this summer. 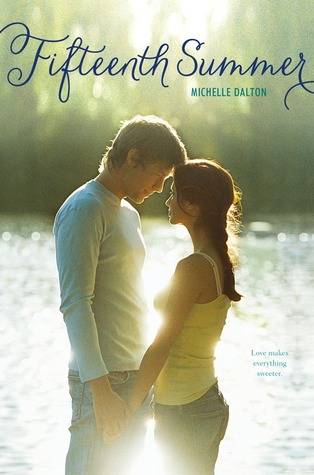 Love blossoms by the lake in this sweet summer romance, in the tradition of Seventeeth Summer and Sixteenth Summer.

Chelsea isn’t looking forward to her summer at the lake. It’s the first time her family has been there since her grandmother died, and she can’t break out of her funk. But her summer takes a turn for the better when she meets a boy who works in the bookstore. Josh is cute, sweet, funny…and best of all, seems to like her as much as she likes him. As the days pass by in a blur of boat rides, picnics, and stolen kisses, she can’t believe how lucky she is. No one has ever made her feel so special, or so beautiful.

But Chelsea knows her days with Josh are numbered. She’ll be heading home at the end of the summer—and he’ll be staying behind. Will this be Chelsea’s summer of love? Or will it be the summer of her broken heart?

Ah. this just sounds like a sweet, summer romance that would be ultra-light and fun.

A heart-stopping story of love, death, technology, and art set amid the tropics of a futuristic Brazil.

The lush city of Palmares Três shimmers with tech and tradition, with screaming gossip casters and practiced politicians. In the midst of this vibrant metropolis, June Costa creates art that’s sure to make her legendary. But her dreams of fame become something more when she meets Enki, the bold new Summer King. The whole city falls in love with him (including June’s best friend, Gil). But June sees more to Enki than amber eyes and a lethal samba. She sees a fellow artist.

Together, June and Enki will stage explosive, dramatic projects that Palmares Três will never forget. They will add fuel to a growing rebellion against the government’s strict limits on new tech. And June will fall deeply, unfortunately in love with Enki. Because like all Summer Kings before him, Enki is destined to die.

Pulsing with the beat of futuristic Brazil, burning with the passions of its characters, and overflowing with ideas, this fiery novel will leave you eager for more from Alaya Dawn Johnson.

This was an earlier 2013 release that I haven’t managed to read yet. It’s received mixed reviews, but Scott Westerfeld blurbed it and the Brazilian angle appeals to me, as I interested in Latin America (I went to grad school for Latin American studies). While this isn’t a cutesy summer-y book, I love my fantasy/sci-fi so I thought I’d throw this one in the mix.

Have you read any of these “summer” titles? What’s on your summer reading list?