The Eternity Cure by Julie Kagawa 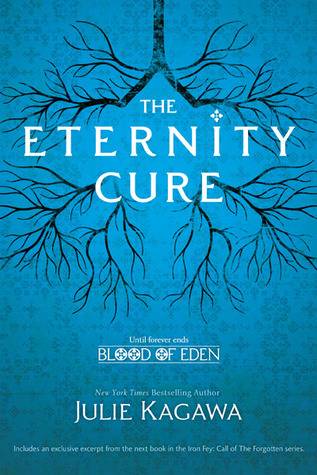 Synopsis: Allison Sekemoto has vowed to rescue her creator, Kanin, who is being held hostage and tortured by the psychotic vampire Sarren. The call of blood leads her back to the beginning—New Covington and the Fringe, and a vampire prince who wants her dead yet may become her wary ally.

Even as Allie faces shocking revelations and heartbreak like she’s never known, a new strain of the Red Lung virus that decimated humanity is rising to threaten human and vampire alike.

My thoughts: For some reasons, I had a hard time getting into this. I think it must be a matter of timing. I loved The Immortal Rules when it came out last year. Perhaps I was in the mood for lots of action when I read it, but I remember being completely absorbed in the story and I recommend it often to patrons. For whatever reason, the sequel did not capture my imagination in the same way. It wasn’t until the end that I was wrapped up in the story and excited to keep reading it, but I was really enjoyed the last quarter of the book and was glad I stuck with it.

Allie is still sarcastic and kick ass. She’s determined and fierce, but also striving to retain her sense of self and her human values even though she’s now a vampire. I greatly admired her dedication to finding Kanin.

Jackal, who was the big, bad Raider King in the first installment, is now the comic relief, and his character didn’t really work for me. His lines were sometimes funny, but he gave off the impression of a sidekick and never felt like a character that stood on his own.

The romance is mild enough to please those who prefer their love stories to be a subplot rather than the main focus of the story. I do appreciate the inversion of the traditional bad boy supernatural love interest who battles with his desire to corrupt/exploit/bite the innocent, good girl. It’s Allie who struggles with her Hunger and her feelings for Zeke. I wasn’t exactly feeling the chemistry between them, possibly because I forgot how they developed an attraction in the first book and I wasn’t reminded of much that happened in The Eternity Cure.

The biggest strength of this book is the action and gore. Whoa, there is a lot of blood and guts and several series of fight scenes. There is a lot of violence and death. I  am more frightened by psychological horror, so it’s not very scary to me, but it was a fun, fast-paced read. There were a couple of twists at the end that entice a reader to finish the trilogy, though I was not a fan of the switch to a third person (non-Allie) point of view for the last couple paragraphs.

The Immortal Rules isn’t a spectacular book, but it delivers in the horror and action and is a solid read. The characters may not be the most nuanced and the plot wasn’t surprising, but readers looking for an escapist supernatural post-apocalyptic horror novel might enjoy it.

Recommended for fans of:

YA Between the Lines: “The plot was always moving, and there wasn’t much time for mushy romance, which I liked because it was more realistic.  I loved the plot and character driven story as well as the gore and violence that came along with society.  She wasn’t afraid to let bad things happen to the characters.”

The Book Lantern: “Unfortunately, this only makes things worse. Kagawa introduces all of these interesting themes, and then only barely scratches the surface – just enough to show you glimpses of what this book could have been, and make you wonder why it never came through.”

3 thoughts on “Vampire Virus: The Eternity Cure by Julie Kagawa”