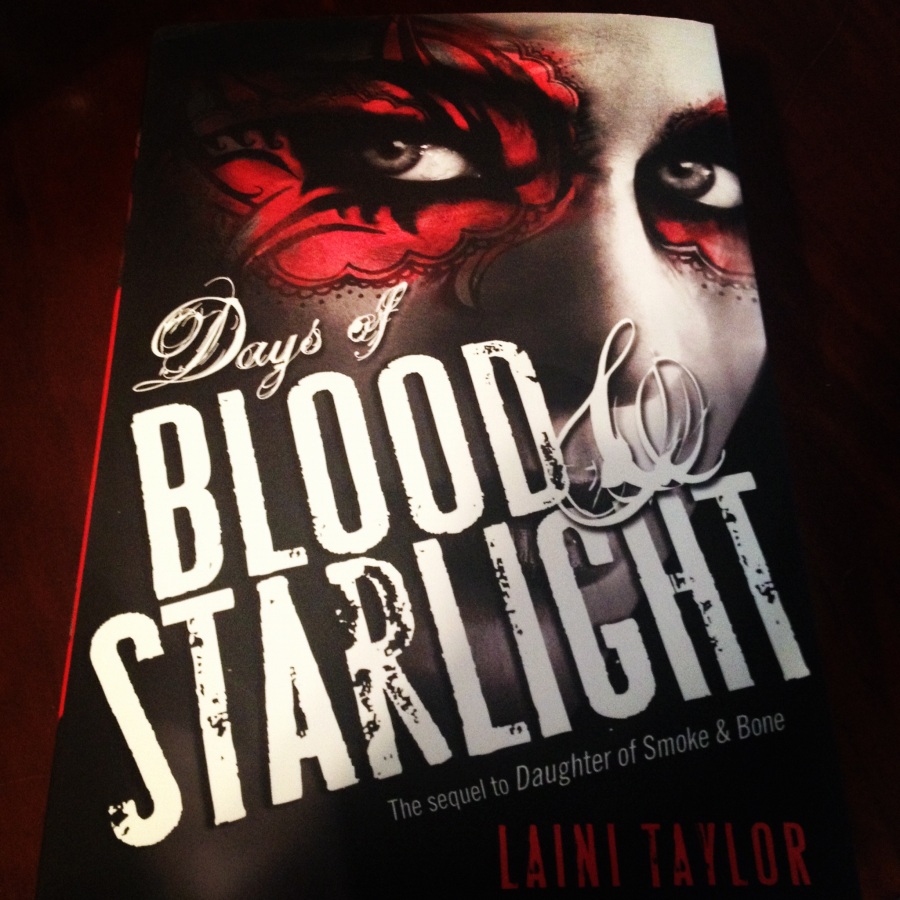 Monday night, at the lovely little bookstore in Fairway just minutes down the road from my grandma’s house, I spent the evening with Laini Taylor, who was in town to promote her new book, Days of Blood and Starlight.

“Once upon a time, an angel fell in love with a demon. It did not end well.”

I have read a number of angel and demon books: the utterly forgettable, the cliched, the trite. But as soon as I met Karou with her blue hair and her sketchbook and her demon family and her errands collecting teeth in exchange for wishes, I knew she was a character I couldn’t help but fall in love with. And I knew that Daughter of Smoke and Bone was not like other books and Laini Taylor was not like other authors.

Laini Taylor is magical. If I didn’t already know that from reading her books, spending an hour listening to her talk would have convinced me.

She spoke about how the idea for Daughter of Smoke and Bone came to her as the story of Karou arguing with Brimstone, of him not taking the bait. How she knew he wore a wishbone around his neck and the question became but why?

Laini talked in depth about her writing process, especially of how difficult it can be for her to get that first draft completed because she is a perfectionist who lives for revising. You can read more about her writing advice in Publisher’s Weekly.

She took questions from the audience, and spoke at length with my sister about Morocco (my sister studied abroad there last year and is engaged to a Moroccan man). She indulged my curiosity by talking about how a quote from Monty Python ended up in Days of Blood and Starlight (turns out, it’s not because the book was written especially for me, which is what I thought at the time, but that she quoted The Holy Grail a lot with her sister—mostly the knights who say “ni”—as a kid and thought it worked for the quirky Suze and Karou).

I found it interesting was that there was not a single teen in the audience (unless they were hiding in the back). My sister and I sat next to a couple of librarians, and several other audience members seemed to be aspiring writers, if judging by the nature of their questions.  What was frustrating to me was that my sister and I seemed to be the only ones who had read Days of Blood and Starlight, so Laini wouldn’t discuss anything too “spoiler-y.” I’ll save the rest of my thoughts on the book for a review.