Since Banned Book Week was the first week of October, and Teen Read Week the second, we did TWO window displays for the month. After spending a good chunk of time hand cutting the flames for the Banned Book display, I wanted something simpler, but also needed to fit it in with the Teen Read Week theme “It Came from the Library!” which was intended to feature the creepy, scary things that you can find in your library. Since we have two zombie themed events this month (our town hosts a downtown “zombie walk” as a fundraiser, so we had a makeup and hair program where patrons could get zombified, and we also have a local zombie organization presenting tips on how to prepare for the zombie apocalypse—or really any disaster) thought it should also feature zombies.

Since I am not particularly creative and find books themselves the best place to find inspiration for displays (as evidenced by the Cabinet of Wonders and Winter’s Bone displays) I thought using the collection of short stories Zombies v. Unicorns would be a fun hook that would allow for passive participation and feature a variety of young adult authors. 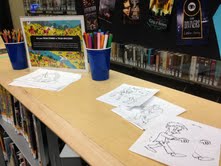 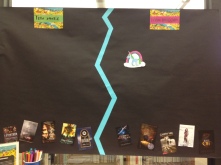 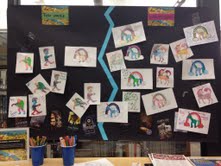 I printed off two different zombie coloring book pages along with two unicorn pictures and put them up with a set of markers and colored pencils by a flyer prompting kids to pledge their allegiance to “team zombie” or “team unicorn” by coloring and taping up one of the pictures on their team’s respective side. We featured a display of books by the authors whose work is featured in the anthology as well as zombie and unicorn books. It was immensely popular, and nearly everything has been checked out, even books that hadn’t circulated in a while like Diana Peterfreund’s Ascendant and Rampant “killer unicorn” books and some of the older, campier zombie titles in our collection.

I share these because I scour librarian blogs and Pinterest looking for ideas for book displays, because I’m no expect or especially talented and I like to get ideas from what other people are doing. I figure the least I can do is share what we’re doing at my library, too.