So, there are a lot of dystopian YA novels out there, and a whole new crop of them this fall. In fact, there were so many I had to update my If you liked The Hunger Games flowchart (and I still feel like I’m leaving some out).

Despite the seemingly endless supply of novels about a teen challenging the authority of their seemingly perfect yet obviously malicious society, none are quite like Crewel by Gennifer Albin. 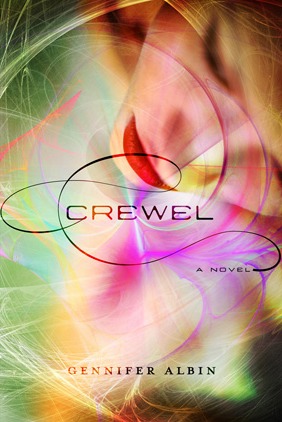 That’s what the other girls whisper behind her back. But sixteen year-old Adelice Lewys has a secret: she wants to fail.

Gifted with the ability to weave time with matter, she’s exactly what the Guild is looking for, and in the world of Arras, being chosen as a Spinster is everything a girl could want. It means privilege, eternal beauty, and being something other than a secretary. It also means the power to embroider the very fabric of life. But if controlling what people eat, where they live and how many children they have is the price of having it all, Adelice isn’t interested.

Not that her feelings matter, because she slipped and wove a moment at testing, and they’re coming for her—tonight.

Now she has one hour to eat her mom’s overcooked pot roast. One hour to listen to her sister’s academy gossip and laugh at her Dad’s stupid jokes. One hour to pretend everything’s okay. And one hour to escape.

Because once you become a Spinster, there’s no turning back.

The concept behind Crewel is fascinating. I loved the passages where Adelice is weaving time and learning about how Spinsters create and control life in Arras. It’s kind of like the mythology of the Fates crossed with the mythology of The Matrix. Though I personally wish there would have been more of a sci-fi component, it worked as the basis for this fantasy world.

Adelice is a likeable character. She’s snarky, and her sarcastic dialogue was delightful. I like a heroine with sass, and Adelice certainly delivered. Her ability to see the strands of time and matter, to pull them apart and stitch them back together, could have made her haughty or self-important, but she remains down-to-earth and loyal to those she cares about even when she’s being tempted with an extravagant life of pretty dresses and fancy parties that is what most girls in Arras dream of having one day.

Like so many YA novels, this one features a love triangle — Erik, the charming blond, and Jost, the quiet, dark-haired boy. Yet they both have those piercing blue eyes…

While it was awfully convenient that these two young men happen to be available to help Adelice once she’s been taken by the Guild, and doubly convenient that they both have feelings for her (though she only seems to have romantic feelings for one…) this “love triangle” didn’t immediately turn me off the way some do. The twist at the end (I’m trying not to spoil) made me want to find more about their pasts, which I already found compelling.

I love a good villain, and this was where Crewel did leave me a bit disappointed. Ambassador Cormac Patton, while lecherous and repugnant, didn’t seem to have much depth or motivation. the ambitious, jealous, Spinster who is responsible for Adelice’s training but mostly just torments and humiliates her, is very one-dimensional. As I’m fond of imagining stories from other character’s points of view, I found myself wondering what made her tick, what her story was, but sadly, it was never revealed. The Guild is the true antagonist, as they are the ones who control the Spinsters and dictate the pattern of the weave that is the world of Arras, but we learn so very little about them. I guess that’s what sequels are for…

In the tradition of The Handmaid’s Tale, Crewel had the potential to be read as a feminist text. While Spinsters, and particularly the Creweler, who is the only one who can gather the raw materials that Spinsters weave to make the world of Arras, are the ones with the power, they are controlled by the men of the Guild. Even women who don’t have the talent for weaving and live “normal” lives are only permitted to work in subservient service positions. Spinsters and regular citizens alike are objectified and forced to conform to a very sexualized vision of femininity. Throw in some illicit lesbian relationships, and you’ve got the perfect set up for a critique of patriarchy…but Crewel just didn’t pack enough of a punch to meet my feminist expectations. Of course, there are always those sequels.

Despite being less than perfect, Crewel is a stand-out addition to the young adult dystopian romances that are still all the rage with the patrons at my library. It’s a highly readable, inventive, and well-written novel that I anticipate will be a hit, especially with fans of Delirium and The Selection. It’s certainly the most creative and unique dystopian world I’ve come across this year.

Note: I received an advanced reader’s copy from the publisher.

6 thoughts on “Time + Matter: A Review of Crewel by Gennifer Albin”