I love taking a chance on debut authors, especially when I get to read them early and don’t have the chance to be influenced by the opinions of others. I read this debut—one of my most anticipated of 2015) over Thanksgiving break while I was visiting my brother in LA. I was all prepared to be swept away by the story and really wanted to love this “feminist” retelling of Sleeping Beauty. Unfortunately, it did not live up to my expectations.

Genre: young adult fantasy, fairy tales, retellings
Synopsis: One hundred years after falling asleep, Princess Aurora wakes up to the kiss of a handsome prince and a broken kingdom that has been dreaming of her return. All the books say that she should be living happily ever after. But as Aurora understands all too well, the truth is nothing like the fairy tale.

Her family is long dead. Her “true love” is a kind stranger. And her whole life has been planned out by political foes while she slept.

As Aurora struggles to make sense of her new world, she begins to fear that the curse has left its mark on her, a fiery and dangerous thing that might be as wicked as the witch who once ensnared her. With her wedding day drawing near, Aurora must make the ultimate decision on how to save her kingdom: marry the prince or run. 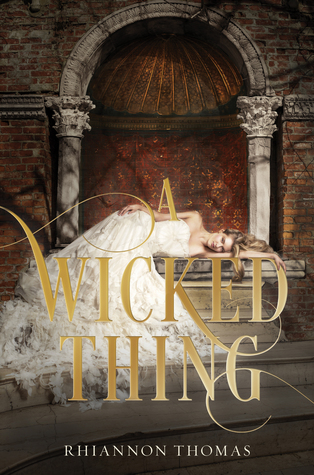 My thoughts: I’ve been reading Feminist Fiction, the author’s blog, long before I ever knew she was a YA novelist. It’s full of great analysis of pop culture—books, movies, and TV—through a feminist lens. Because I enjoy her blog, I was so sure I’d love this novel, but it just didn’t work for me (which is almost hard to admit, it makes me so sad).

The opening scene is fantastic. Aurora wakes up, bewildered, and not at all swept away by her not-so-charming prince. It’s not at all a surprise that this concept, of a fairy tale that begins after the happily-ever-after, would catch the eye of an agent or publisher, especially when it is delivered so well. I mean, this scene is riveting, and Aurora’s emotions are visceral.

Unfortunately, after the first few chapters, the story starts to fall apart. In my opinion, it’s because Thomas so clearly has an Agenda (yes, with a capital A). Even if I hadn’t known her predilection for feminist fiction, I would have spotted her attempts to say something important about fairy tales and YA tropes. Good stories don’t slap readers across the face with their message, and this one does.

While Thomas lays the foundation for good political intrigue, it never materializes. The majority of the novel consists of Aurora listing the many problems of her kingdom, but doing nothing. Her lack of agency is at odds with the author’s objective of subverting the standard princess tropes.

Aurora spends most of her time bemoaning the buffling, awkward prince Rodric, who is supposed to be her one true love, since after all, he awoke her with a kiss, but these aren’t the only potential love interests presented. There’s also the rakish rogue who fills the role of bad boy, but also the revolutionary she meets while escaping the castle at night. It’s a caricature of a love triangle, with many options presented but Aurora choosing none.

At least in this installment. Worst of all, the thin plot is merely set up for a series.

Recommended for fans of: This books will appeal to only the most die-hard fairy tale fans. If you’re really into the shallowness of Disney animated films or very intrigued by the “what happens after the kiss” hook, you might enjoy this. For more thought-provoking fairy tale retellings, try Tiger Lily by Jodi Lynn Anderson. For a fun, action-packed fairy tale with perfect pacing, I much prefer Cinder by Marissa Meyer.

Lisa at Read Breathe Relax: “Although this book did a great job of tackling big concepts and societal norms, there wasn’t a lot of fun or life to this story. Between confusing romances and an uneventful plot, I think I enjoyed the concept of this book instead of the actual thing.”

Reader of Fictions: “I’m certainly going to be reading more about Aurora’s journey. I think Aurora’s got a lot of potential for an amazing character arc. Right now, she’s not very strong but she wants to be and I think she could learn. I hope to see that happen.”

3 thoughts on “Book Review: A Wicked Thing by Rhiannon Thomas”