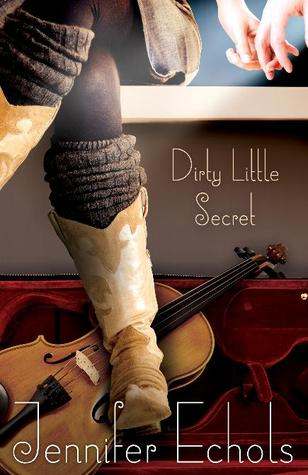 Synopsis (Goodreads): Bailey wasn’t always a wild child and the black sheep of her family. She used to play fiddle and tour the music circuit with her sister, Julie, who sang and played guitar. That ended when country music execs swooped in and signed Julie to a solo deal. Never mind that Julie and Bailey were a duet, or that Bailey was their songwriter. The music scouts wanted only Julie, and their parents were content to sit by and let her fulfill her dreams while Bailey’s were hushed away.

Bailey has tried to numb the pain and disappointment over what could have been. And as Julie’s debut album is set to hit the charts, her parents get fed up with Bailey’s antics and ship her off to granddad’s house in Nashville. Playing fiddle in washed-up tribute groups at the mall, Bailey meets Sam, a handsome and oh-so-persuasive guitarist with his own band. He knows Bailey’s fiddle playing is just the thing his band needs to break into the industry. But this life has broken Bailey’s heart once before. She isn’t sure she’s ready to let Sam take her there again…

Now, I don’t have a problem with fans of country music, but I’ve never been able to appreciate more than the classics like Patsy Cline or Johnny Cash. Even though I’m from the Midwest.

Still, I love books that prominently feature music, so I decided to check this out, and it ended up being a fun, fast read.

Bailey wasn’t straight country. She had more of a rockabilly flair and was a little jaded, a little bitter, and a little bit of a rebel and wasn’t some wannabe Taylor Swift, so I liked her a lot more than I anticipated.

The conflict often felt a bit…melodramatic? manufactured? I get that Bailey wants to play music. She LOVES performing. I also understand that she wants to have her college education paid for, and her parents won’t do it if she jeopardizes her sister’s career by performing in public. I get that she was very attracted to Sam, and that she was hesitant to commit because he was kind of a player and might just be using her. What made the plot work was the balance between the two conflicts. They were connected. The focus remained on the core story, and it took place in a relatively short time period, so there weren’t extraneous scenes.

I was put off by a subplot involving a jealous, petty girl who feels threatened when Bailey joins the band. I get tired of this sort of dynamic being replayed in YA fiction. Not that it doesn’t happen. It most certainly DOES. I just wish there were more stories about strong female friendships.

The highlight of this novel was the setting. Echols made Nashville come alive, and I felt the energy of the clubs and the lights of the city. The scenes where the Bailey and her new band mates were on stage were electrifying, and the music and energy seemed to jump off the page.

The ending wraps up a little too neatly for my tastes, but it will certainly find many fans. Readers looking for a more mature contemporary YA romance (this one was pretty steamy, but still responsible) will enjoy this novel, as will (country) music fans.

Beth Reads: “Though not Echols’s strongest work the rare country music setting and focus on the romantic as well as the musical plot keep this one from seeming like a sad alternate universe Lucy Variations. I would add this to your collection if any of your teen patrons are into country music, if Echols’s other books are popular, or if your teens are into authors like Huntley Fitzpatrick or Katie McGarry.”

April @ Good Books Good Wine: “Bailey has a legitimate fear of him using her to get famous and for her musical connections. Plus both characters have issues to get over. I personally, loved it. I was really feeling the tension between Bailey and Sam and the HEAT. Oh yeah, there’s real “romantic” chemistry between them.”