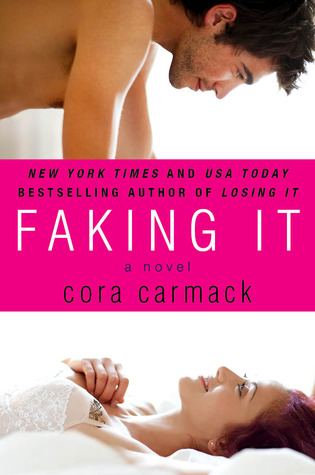 Faking It by Cora Carmack

Synopsis (Goodreads): Mackenzie “Max” Miller has a problem. Her parents have arrived in town for a surprise visit, and if they see her dyed hair, tattoos, and piercings, they just might disown her. Even worse, they’re expecting to meet a nice, wholesome boyfriend, not a guy named Mace who has a neck tattoo and plays in a band. All her lies are about to come crashing down around her, but then she meets Cade.

Cade moved to Philadelphia to act and to leave his problems behind in Texas. So far though, he’s kept the problems and had very little opportunity to take the stage. When Max approaches him in a coffee shop with a crazy request to pretend to be her boyfriend, he agrees to play the part. But when Cade plays the role a little too well, they’re forced to keep the ruse going. And the more they fake the relationship, the more real it begins to feel.

My thoughts: I actually want to like “new adult” fiction. Really, I do. I’ve been sampling the big titles in this emerging genre because I’m writing an article about it, but also because I personally am interested in reading about slightly older protagonists in books that still have the urgency and immediacy of YA. It’s also great for reader’s advisory. I work in a public library in a university town, so I often get requests from college students for recommendations for books that are “upper YA” or talk to readers looking for something “fun, but more grown-up” (no one I’ve met in public ever calls it “new adult” but I’m often able to discern that these might be the kind of books they are interested in).

While I knew going into Beautiful Disaster that I probably wouldn’t like it (and I didn’t), Faking It was one I thought I might, due to the hook and many positive reviews from readers whose opinions often line up with my own.

And I didn’t hate Faking It. I understood the appeal to a certain extent. But I didn’t think it was particularly well-written or that the plot was believable.

The meet-cute is actually funny. Cade is at still at the coffee shop after his friend that he’s been in love with and her  boyfriend (the couple from Losing It) leave. Max, a rocker girl with retro pin-up style, is at the counter with her punk boyfriend. Cade’s intrigued, and even more so when the boyfriend leaves and Max approaches him and asks him to pretend to be her boyfriend in front of her parents, who are due to arrive any moment for a “surprise” Thanksgiving day visit. Cade agrees because he’s an actor and finds Max attractive.

And the resulting plot is fairly predictable. Cade, the all-American good guy that he is, charms Max’s parents and is roped into Thanksgiving dinner the next day. Of course he runs into Max again before that when his neighbor drags him out to the bar where Max works as a dancer (not exotic) and bartender.

Unfortunately, from there, Carmack uses a plot device that always turns me off. Max is assaulted by a stranger in a dark alley and Cade rescues her. This seems to be a preferred trope in new adult fiction. While this isn’t the driving force behind the entire story, I find it disappointing that this sort of incident is used to bring a couple together. Sure, it happens in real life, more than most people realize or want to know about, but I feel like it’s a pretty cheap trick to develop a romantic relationship.

I did like Carmack’s attempt to turn the “bad boy falls for a good girl” stereotype on its head and have the guy be the straight-laced type and the girl the tattooed and pierced rocker, but I felt the characterization was rather flat and they never transcended stereotypes. The reader is told what everyone is like, but never shown. The dialogue is unbelievable, especially in scenes with Max’s parents.

What I did buy was the chemistry. Even if she uses the traditional methods like a trip to  a sexy dance club to build it, Carmack writes great sexual tension.

My big problem with this book, as well as all the books marketed as new adult that I’ve read so far, is that the sex seems to be the whole point of the book. Through a few college students into a ridiculous scenario and let the sexytimes roll. Fans of new adult tend to emphasize how much they want stories about college situations, and while there is some conflict over school, money, and jobs, I never felt like those themes were at the center of the novel. This book is just contemporary romance.

And yet again, I’m disappointed by the lack of female companionship in the novel. At least for me, my relationships with girlfriends were just as important as my dating life while i was in college. But there’s no mention of Max’s friends…with anyone.

This wasn’t a terrible book, but it wasn’t a terribly good book. It was a breezy morning read for me, but it didn’t leave me with a connection to the characters. The only reason I would considering trying out Losing It is this review from Readers of Fictions. Ultimately, I felt that Faking It was an apt title, because this book just felt…fake.

The Autumn Review: “Overall, I loved Cade and Max’s story and truly wasn’t ready for it to end. It was a book with meaning for these characters. Meaning and healing. And also a whole lotta love.”

The Flyleaf Review: “But after finishing Faking It, I knew that I had to write down just how impressed I am with the development of Cora Carmack’s writing style. Faking It proves that Carmack has honed her skills but thankfully did not lose any of the playful, sexy edge that everyone loved about Losing It.”

13 thoughts on “A Fitting Title: Faking it by Cora Carmack”