My favorite evening BEA-related event was the Tumblr Does YA at Housing Works Bookstore. The had free drinks and there was a lot of interesting people there but it wasn’t too crowded (which was a blessing after the madness of the exhibition floor).

At the door, everyone got a name tag that also asked for your Tumblr! Since my personal Tumblr is really long and I don’t really use it strategically in any way, but I do run my library’s Tumblr and am interested it the platform for libraries, I put that one down.

So after mingling in the crowd for a while, the program began. Amanda of Housing Works talked about their mission to support those experiencing homelessness and suffering from HIV/AIDS and then Rachel the Book Queen of Tumblr introduced the authors who would be speaking.

Ruth Baron, author of Defriended, went first. I hadn’t heard of this book prior to seeing she was going to be at the event, but it is said to have that creepy cheesy R.L. Stine factor going for it from the reviews I read on Goodreads. It isn’t anything I probably would have picked up if I hadn’t seen Ruth’s talk. Because OMG, she was hilarious and adorable.

Luckily for you, she also posted her speech on her Tumblr and you can read it and enjoy all the Veronica Mars and Buffy references yourself. I loved how enthusiastic Ruth was about teen culture—these are the type of authors I love to see writing YA.

Eliot Schrefer went next. I’d heard of his book Endangered because of the National Book Award and Maggie Stiefvater recommending it on her blog, but I didn’t know much about him. He his very honest thoughts about writing two books for the adult market that flopped and then feeling like he was demoted when he was told his third book was YA 0r maybe even close to middle grade. But then how he changed his mind about YA and decided it was okay. I appreciated his honesty, but I can’t say that his speech impressed me? 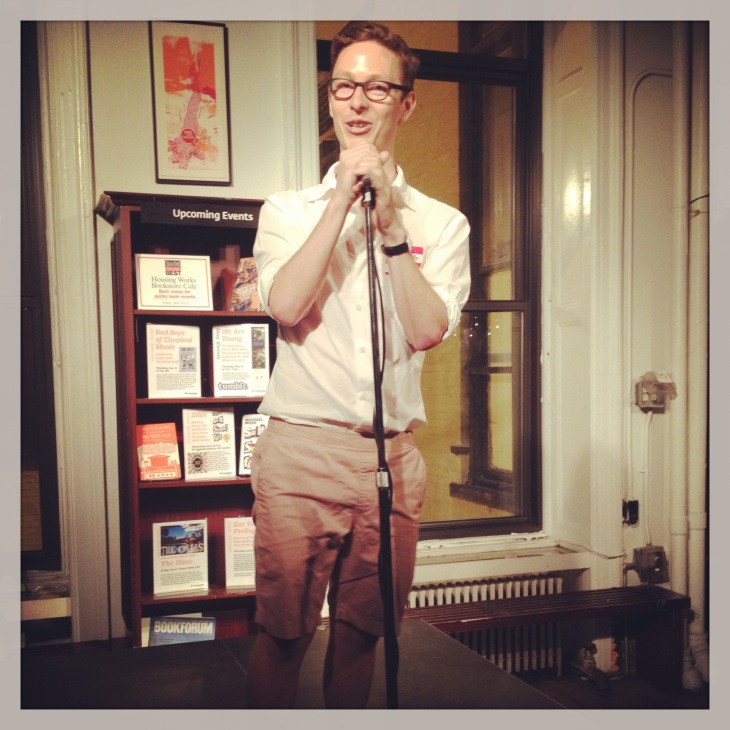 Then, Rainbow Rowell spoke, and she was wearing the most adorable cardigan with pink seahorses. And she read from Fangirl, which I’d already read and fallen in love with and can’t wait to reread. The scene she chose is Cath first telling her roommate she’s active “in the fandom” and her roommate’s response is “what the fuck is ‘the fandom’?” and it is great.

Rainbow is honest and humble and funny and just delightful to meet, just as you would expect after reading her books. 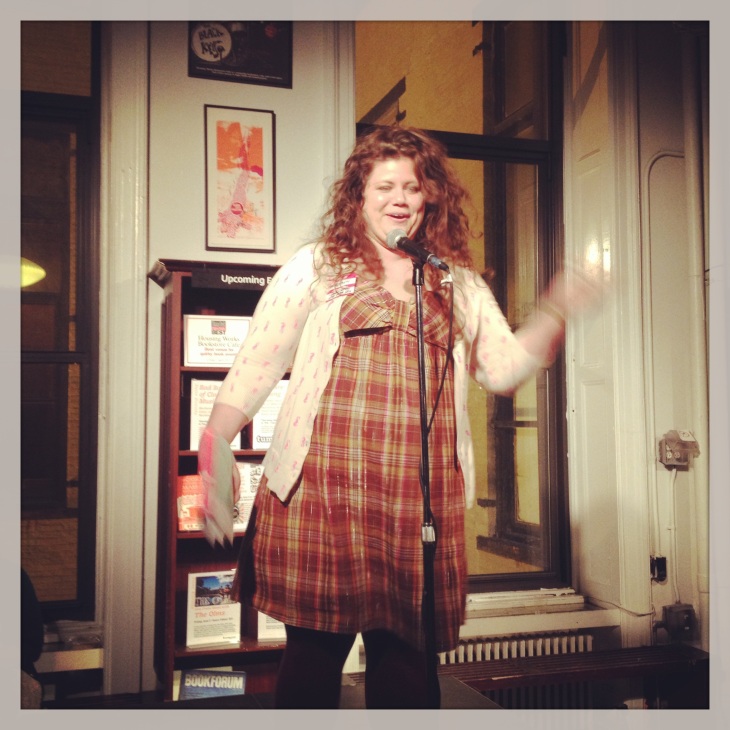 I ended up buying another copy of Eleanor & Park (because hey, the proceeds benefit charity) and to get signed, even though I had a hardback at home (which I won’t be parting with, because it’s a first edition and my signed one says “New York Times Bestseller” on it). Since it wasn’t one of those rushed BEA signings and was a more casual event, Rainbow could chat with readers for much longer, which was fun. I ended up meeting two other lovely ladies also named Molly who work in NYC indie bookstores and we chatted and ended up deciding we should probably all form a band which is complicated by the fact that none of us are at all musical and I don’t live in NYC.

Then I got to talk to Rainbow about fanfic and reading and other assorted fun, and it was great. It was the only signed book I brought back from BEA and it was the perfect one for me!

I left this party very enthusiastic about literary events like this, which are much more my speed than BEA or a publisher sponsored event. I also left feeling much more enthusiastic about Tumblr. I remember being confused by the popularity of it a few years ago and after some experimentation, decided it wasn’t the platform for me. I was familiar with certain Tumblrs that have defined themes or are fandom related and would occasionally check them out, but I wasn’t using it personally. When we started talking about it in social media meetings at the library, I decided to give it another try, and found I did like the social aspect of it (and let’s be honest, gifs). I find Tumblr posts have a longer half life than Facebook and Twitter by a large margin, and people actually search the tags. I am really enjoying running the library one.

Are you on Tumblr? Leave me a note if you are, or you can find me here.

4 thoughts on “Tumblr Does YA at BEA”