The library has moved! We loaded up hundreds of thousands of books, then unpacked them in what we’re calling “Free Borders” because our temporary location while we undergo a multimillion dollar 20,000 square feet expansion and renovation is in the old Borders building. Coordinating and executing such a (physical) labor intensive job only further demonstrated that I work with an awesome group of people. I thought it was so cool when my community approved the bond that funded this project in the middle of the recession. Now it’s going to become a reality!

Bonus: I have definitely improved muscle tone in my shoulders and arms from all that un-shelving and shelving. I also found this gem of a book in children’s while shelf reading.

I have been buying all the books!

This doesn’t even include what I bought around the holidays and what I received as gifts…this is just what I’ve purchased for myself in the past week (and a couple of ARCs of adult fiction I picked up from the library and my mother-in-law.

The Splendor Falls by Rosemary Clement-Moore {purchased, The Dusty Bookshelf} YA with a ballet angle…I was willing to chance that I’d like this enough to own it, even though it’s available at the library.

Louise, Amended  by Louise Krug {purchased, The Dusty Bookshelf} This is a memoir by a local author with a premise that I find interesting…you should check it out.

The Friday Society by Adrienne Kress {purchased, The Dusty Bookshelf} I’ve read reviews that say this is about FEMALE FRIENDSHIPS, plus steampunk…yeah. I think I’ll like it enough to keep it on my shelf, even though we did a copy for the library, too.

Through to You by Emily Hainsworth {purchased, Mysteryscape} I went to an author event, and got a signed copy (which I may, or may not, raffle off at a teen book club meeting).

Level 2 by Lenore Applehans {purchased, Mysteryscape} Again, author event, and this time I got one for me and one for giveaway to teen book club.

Mr. Penumbra’s 24 Hour Bookstore by Robin Sloan {purchased, The Raven Bookstore} Because it’s something I thought Mister BS and I would both read, (sharing on a Kindle is annoying!) and it glows in the dark (I’m a fan of novelty).

Deadlocked by Charlaine Harris {purchased, The Dusty Bookshelf} So, I already own the Kindle version, but I have the rest of the series in first editions…thought I should get it just for the hell of it (and I think I’ll re-read before the final installment in the series comes out in May).

The Darlings by Christina Alger {purchased, The Dusty Bookshelf} Family drama during the financial crash pf 2008. Sounds like my style.

The Witch of Little Italy by Suzanne Pamieri {ARC through library} Coming to a Target near you.

For Kindle, I’ve bought Finnikin of the Rock ($1.99 and I own Froi of the Exiles on Kindle as well), Northhanger Abbey (free, my favorite Jane Austen), Not that Kind of Girl by Siobhan Vivian ($2.51), Indian Fairy Tales (free), The Miseducation of Cameron Post (yes, I also own the hardback, but this one is searchable!).

ARCs (the highlights, or ones I’m most excited to read): The Fire Hose Girl, Between the Devil and the Deep Blue Sea, In the Shadow of the Blackbirds, How My Summer Went Up in Flames, Criminal, Linked, Book of Broken Hearts, Taken, VIII, Mind Games, Strands of Bronze and Gold, Through the Ever Night, Winger, The Culling…and more!  Moral of the story…I need to get to reading!

I also scored two cheap t-shirts at The Dusty Bookshelf, rounding out my collection of t-shirts from local downtown businesses. Also, who doesn’t want a Reading Rainbow parody t-shirt AND a bookish cat t-shirt?

Miss Kitty was shocked to learn Virginia Woolf’s feelings on the feline afterlife.

I got to attend an author event with Lenore Applehans and Emily Hainsworth in Kansas City on Saturday. It was fun to hear them discuss their work and their experience as debut novelists. 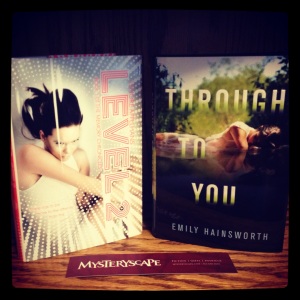 I also participated in this comment challenge. I discovered lots of new blogs! It was fun. I am already diligent about commenting on blogs, because the whole point of this for me is to connect with other librarians/readers/writers, but this was a nice push to expand beyond my usual blog-reading.

I reviewed OUT OF THE EASY, which I loved, COLIN FISCHER, which I thought was cute if gimmicky, THE DEAD AND BURIED, which I wished had a meatier ghost story thought the mystery was entertaining, and started a new feature on spotlighting my favorite authors with a profile of JOSÉ SARAMAGO.

What bookish pursuits have you been up to?