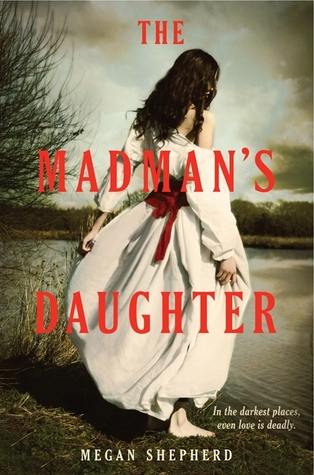 The Madman’s Daughter by Meghan Shepherd

Synopsis: In the darkest places, even love is deadly.

Sixteen-year-old Juliet Moreau has built a life for herself in London—working as a maid, attending church on Sundays, and trying not to think about the scandal that ruined her life. After all, no one ever proved the rumors about her father’s gruesome experiments. But when she learns he is alive and continuing his work on a remote tropical island, she is determined to find out if the accusations are true.

Accompanied by her father’s handsome young assistant, Montgomery, and an enigmatic castaway, Edward—both of whom she is deeply drawn to—Juliet travels to the island, only to discover the depths of her father’s madness: He has experimented on animals so that they resemble, speak, and behave as humans. And worse, one of the creatures has turned violent and is killing the island’s inhabitants. Torn between horror and scientific curiosity, Juliet knows she must end her father’s dangerous experiments and escape her jungle prison before it’s too late. Yet as the island falls into chaos, she discovers the extent of her father’s genius—and madness—in her own blood.

Inspired by H. G. Wells’s classic The Island of Dr. Moreau, The Madman’s Daughter is a dark and breathless Gothic thriller about the secrets we’ll do anything to know and the truths we’ll go to any lengths to protect.

I think horror is going to be big in 2013, which is fine by me. I’m all for dark and creepy. The Madman’s Daughter definitely delivers on both counts. Especially because I had overlooked/forgotten that the particular madness of Juliet’s father was EXPERIMENTING ON ANIMALS SO THAT THEY RESEMBLE, SPEAK, AND BEHAVE AS HUMANS. I was kind of glad I didn’t realize that when I began the novel. All the signs pointing to it were there, but I still had that “oh, god, oh no…it can’t be that because it’s just too gross and not possible and ew, ew, ew…” feeling throughout the book, which is pretty much the point of horror, is it not? (Sorry if I ruined it for you, but hey, it’s right there in the synopsis).

The world that Shepherd has created is atmospheric. It’s got the Victorian Gothic vibe going from the beginning. I grew up reading Edgar Allan Poe, and this gave me the same thought-provoking shudders as his creepier short stories.

Juliet Moreau is a conflicted heroine from the beginning. She’s doing what she has to in order to survive after rumors about her father’s medical experiments forces him to flee (she thinks he’s dead) and her mother dies from illness. She finds a job as a maid at the medical hospital where her father used to work, cleaning up the bloody operating rooms. It was great to meet a spunky heroine who wasn’t at all interested in ball gowns or parties.

A disturbing incident at the college prompts her to think her father might still be alive, but when she seeks him out, she find her childhood companion and former servant, Montgomery, instead. He’s back loading up with supplies to take back to the island. Though he is reluctant, they set out on a voyage to an island to meet her father after another incident at the college ensures Juliet will no longer be able to work there (both inciting incidents at the college, the one that leads Juliet to Montgomery and the one that point of no return that prompts her to beg Montgomery to take her with him, were problematic for me, but other reviews rave about the beginning of the book, so maybe it was just a personal problem of taste and believability).

While sailing, they rescue a castaway, Edward. This is where my main complaint with the story began. Juliet had immediately developed feelings for him, often admiring his broad, strong shoulders. Then, nearly immediately, she starts to think about Edward as well. Through the rest of the novel, she’s constantly vacillating between the two. I don’t always have a problem with competing love interests, and the set up here had potential. While the wild man vs. civilized gentleman dichotomy is nothing new, the particulars here, especially when I think about how the ending inverted these stereotypes and consider the reasons Juliet’s father had in pushing her toward Edward and away from Montgomery, I kind of liked the idea of a love triangle with this sort of tension.  It was more the nature of Juliet’s mooning over them that I thought was a little over the top. I mean, she’s on a JUNGLE ISLAND with her MAD FATHER and lots of other CREEPY HAPPENINGS. Kissing would not be at the front of my thoughts if I was dealing with all of Juliet’s troubles. I do think that people can develop affectionate for one another even under the most dire circumstances—for instance, Finnikin and Evanjalin or Froi and Quintana in The Lumatere Chronicles—but here, the first person treatment of Juliet’s “spinning” head detracted from the core of the story—the gore! While Juliet’s fixation on romance did grate on me at times, I still enjoyed her as a character. Her curiosity and dark nature make her stand out from other YA heroines.

While the novel is more suspenseful than action-packed, there were several darkly creepy scenes that kept me up late and had me fearful of nightmares. This is not a novel for the faint of heart (particularly if you are a hardcore animal rights activist—I’m vegetarian, and I was kind of squicked out at a couple of parts).  Had it not been for the killer ending, unexpected and heartbreaking and utterly awesome, I might not have recommended this book so highly, but readers who can overlook the dueling love interests will enjoy it. The concept is as relevant today as it was when The Island of Dr. Moreau was originally published. What role does morality play in the search for scientific discoveries? What are the limits, if any? What is at the core of human nature, and can it be fabricated? As far-fetched as the events in the novel are, with genetic engineering and organ transplants, they don’t seem completely impossible. This is a novel that makes you think as well as cringe.

This is the first in a trilogy, though I hope it will take the route of His Fair Assassin (Grace Mercy) by Robin LaFevers and Lunar Chronicles (Cinder) by Marissa Meyer and feature interlocking stories in a common world rather than continue to follow Juliet’s story. I’m a big fan of series taking this form, and from the brief blurb for the sequel to The Madman’s Daughter, it appears as if it will be a retelling of Dr. Jekyl and Mr. Hyde. I feel like Juliet has had enough adventures, and while I enjoyed Megan Shepherd’s writing, I don’t think I’d pick up the sequel if it still features Juliet as a main character.

Reader of Fictions: “I found myself utterly unprepared for was how utterly dark, gruesome, creepy and horrifying this book is.”

The Book Geek: The story was “bogged down by slowness and romance.”

4 thoughts on “Oh My, Frankenstein!: The Madman’s Daughter by Meghan Shepherd”