I hate going into a book with certain expectations. It’s more pleasant to be surprised than disappointed.  I was dying to read Just One Day by Gayle Forman not only because I loved If I Stay and Where She Went so much (find my review here), but also because I was interested in the premise. This title, which is distinctly YA in voice but features a college-aged protagonist, is an example being thrown around when the new category of New Adult fiction is referenced, so I thought it important to see what the content actually was before forming an opinion about it’s relationship to the genre. I’ve been thinking about New Adult literature for a long time now, and have decided to actually read some of the books being discussed before weighing in on the discussion. Unfortunately, both my high expectations and personal prejudices kept me from loving this novel, though I still enjoyed it. 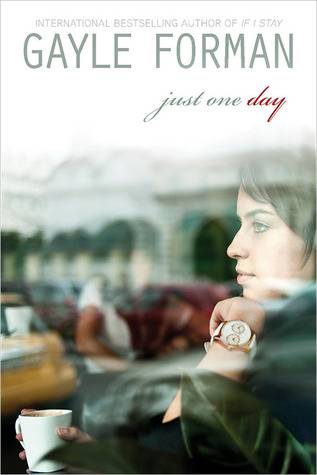 When sheltered American good girl Allyson “LuLu” Healey first meets laid-back Dutch actor Willem De Ruiter at an underground performance of Twelfth Night in England, there’s an undeniable spark. After just one day together, that spark bursts into a flame, or so it seems to Allyson, until the following morning, when she wakes up after a whirlwind day in Paris to discover that Willem has left. Over the next year, Allyson embarks on a journey to come to terms with the narrow confines of her life, and through Shakespeare, travel, and a quest for her almost-true-love, to break free of those confines.

Just One Day is the first in a sweepingly romantic duet of novels. Willem’s story—Just One Year—is coming soon!

I loved Willem. He’s a Dutch actor who travels with a Shakespeare group doing free performances in the open air rather than a theater. This reminds me of Federico García Lorca, my favorite Spanish poet, and his theater for the people tours bringing drama to the countryside. Given my love for Lorca, I was predisposed to like Willem based on this alone, but he is also charming, fun, mysterious. He is certainly the boy I dreamed about running into when I went off to college (but I met Mister BS instead). But he’s not simply that dreamy kind of guy. He had depth, was unexpected. I’d have run off to Paris with him just like Allyson.

But I didn’t particularly like Allyson. She’s not terrible. She’s just as the blurb said—a typical sheltered American good girl. For the “just one day” part of the book, I liked her. She took a chance, she had her doubts, and I was falling in love right along with her. But I wasn’t really rooting for her to find Willem. I thought she should suck it up, get on with her life, and gain some perspective.

True, I think her struggles with finding closure once she’s off at college were realistic and well-portrayed. She wasn’t unbearably whiny or overly dramatic. I do think there should be representation of all sorts of characters with all sorts of dilemmas in young adult literature, and I do think that many young people will relate to Allyson’s experiences. My problem is that other than her  vague struggle to “find herself” in college and ambivalence about her future career goals, there was little external conflict. She was mostly moping about Willem. True, their relationship was left unbearably unresolved, and I wanted to admire her for trying to track him down. I just thought the story and the character would have been more layered had there been something else going on with her.

I wanted to admire Allyson the way I admired Mia from If I Stay.  Mia wasn’t without her flaws, but there was something deeper and more nuanced about her character that I didn’t find in Allyson. Of course, my opinion could be colored by a certain kind of nostalgia that I tend to have for characters in books that I loved. But what made Mia compelling for me was how she persevered in spite of real hardship. What I disliked about Allyson is how passive and dejected she was about something that when viewed from the perspective of someone nearing their 30s seemed rather minor and insignificant. Of course, an 18-year-old who has never experienced a deep and life-changing loss could related to Allyson in a very real way, and I don’t want to diminish the experience of a first love. But still, if the big change a character makes is standing up to her parents about taking a pottery class (for which they are paying $5000), I can’t help but think it a bit of a shallow transformation.

The secondary characters in this novel were hit and miss for me. Even though I wasn’t particularly fond of Allyson’s travel companion, I thought it was interesting to see how a childhood friendship plays out in college. I’m always interested in the way female friendships are portrayed in YA fiction, possibly because I don’t think they get the attention they deserve. Forman gets bonus points for including a character experimenting with her sexuality, though I thought it was constructed in a very typical way (and was a bit dated—unless hairy armpits and Ani DiFranco love are still the best way to recognize college lesbians). Dee, the close friend Allyson finds in Shakespeare class, and her chef boss at her summer job, Wren, felt much more real and were a welcome addition to the story. I appreciated the tidbits of Allyson’s Jewish grandmother, though her parents lacked the charm of Mia’s (which was important to the plot, but less fun to read). The cast of characters that Allyson meets on her second trip to Paris were delightful, and it was nice to see Allyson opening up and connecting with people. I only wish it was something she’d experienced on her own, rather than only as a result of her search for Willem.

Even though I wasn’t as excited about this particular narrator, I still love Gayle Forman’s writing style. She has a way of setting a scene that puts the reader fully in the moment. (Seriously, the Nutella scene! So strange and real and intimate).  For a day in Paris falling in love, their experiences were definitely not typical or traditionally romantic. I thought they were a well crafted backdrop to an unexpected and confusing relationship.

Possibly because I enjoy getting in the head of all the characters in a romance, love first person present tense, but strongly dislike novels with alternating first person perspective, the idea of romantic “duets” appeals to me. Though I didn’t feel like I needed it to make the story complete, Where She Went complimented If I Stay beautifully. What irritates me about the more deliberate set up of Just One Day is that the ending is an unbearable cliffhanger, and I don’t feel like it could be read on it’s own. (And, not to spoil too much, but I might have liked this story better had it ended a few chapters early).

Just One Day was good, but not as great as Adam and Mia’s story. Fans of her work will most likely enjoy this, and readers without my particular opinions about the type of Character Allyson is may even like it better.

Just One Day will be available January 8th, 2013. I received an ARC by bidding on it in the YA for NJ auction that benefited survivors of Hurricane Sandy.

7 thoughts on “Falling in Love: Just One Day by Gayle Forman”