Some novels are just not for everyone, and that’s okay. If everyone liked the same books, a lot of authors would be out of work (and book clubs would be boring). I’d read great reviews of The Lumatere Chronicles by Melina Marchetta, but two other librarians I work with gave it a big thumbs down, so I had to investigate for myself. In just two days, I fell in love with Melina Marchetta’s epic fantasy Finnikin of the Rock. I was completely engrossed in the story of these amazing characters as they journeyed through the kingdoms of Skulendore. 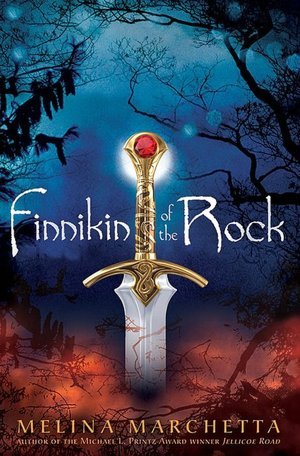 A decade ago, assassins stormed the palace and murdered the royal family of Lumatere. In the ensuing chaos, an imposter king seized the throne and the people burned an accused witch at the stake, who cursed the land. Now, half of the Lumateran population is in exile, and the other half is trapped inside the gates.

Finnikin, son of the captain of the king’s guard, made a blood oath as a child to defend Lumatere along his friend Prince Balthazar and his cousin, Lucien, a memory he still carries with him.  For ten years he’s traveled with Sir Topher, the king’s advisor, chronicling the names of his people who have fallen and the stories of those who have survived in The Book of Lumatere. In their travels they also appeal to foreign royals for land so that Lumaterans currently living in exile in terrible conditions plagued by disease, sold into slavery, or starving to death can begin to build a new home. Though the future looks bleak, Finnikin still carries a small hope in a prophecy that his beloved friend Prince Balthazar lives and is the key to breaking the curse, and that his father, Trevanion, the captain of the king’s guard, is alive.

A dream brings Finnikin to the edge of world in search of a girl he believes may lead them back to Lumatere. Evanjalin, the young novice, reveals she can visit their people trapped inside Lumatere in her dreams and that Prince Balthazar is indeed alive. Evanjalin leads them on an impossible quest into dangerous territory. But this strange girl is not what she seems, and the truth of her identity will test Finnikin’s faith in the pledge he made with Balthazar and Lucien on the rock as a child, and the prediction the burned witch made when he was a boy about his role in Lumatere’s future.

It would be impossible to detail any more of the story without giving away spoilers (and most of it wouldn’t make any sense). Finnikin of the Rock is a complicated and intricately plotted story with an expertly crafted world that is not easily explained. As with most epic fantasy, there is an enormous cast of characters, and Marchetta renders each one in great depth and detail. Readers who are looking for a simple, straightforward story will be disappointed and likely give up before the end. Those who want the full experience of complete immersion in a fantasy world will enjoy The Lumatere Chronicles. The magic is strange (but beautiful), and the plot relies on revision of what the characters originally believed to be true. Readers who don’t appreciate being lied to (just as the characters in the story are deceived) will find the story frustrating. Those who can suspend belief and hold on for the wild ride through the twists and turns of the plot will enjoy the book immensely.

Evanjalin is one of my new favorite characters in YA literature. When I think of the most sympathetic characters in young adult literature—characters that beloved like Harry Potter—they all share one thing in common. They have had to sacrifice, they have suffered hardship. Evanjalin is this kind of character. Still, she’s not perfect. She’s unabashedly manipulative and deliberately deceives Finnikin and Sir Topher on their journey, but even her lies are for the greater good. As she tells Finnikin: “There are worse things than a lie and there are better things than the truth!” She has a wisdom far beyond her years and is one of the strongest female protagonists I’ve read.

Though romance isn’t the driving force of the story, the relationship between Finnikin and Evanjalin unfolds in an organic and believable way. Both are strong personalities, and they often clash. They both come to respect one another and love each other despite recognizing each other’s flaws. They have the kind of love that can make someone believe in destiny. The ending scene was perhaps one of the sweetest I’ve read.

My undergraduate degree was in political science, so I tend to be drawn to stories that have complicated political intrigue as a major plot element. I love how fantasy can speak about real life political and social issues. The experiences of the people of Lumatere, both inside the gates and those living in exile, are described in great detail. Marchetta doesn’t shy away from the gritty details that people living under authoritarian rule face. The fear of those living under the imposter king is not unlike what people living under repressive regimes in our real world experience, even if the world of Lumatere is feudal. Modernity has not exempted people under authoritarian governments from violence and rape. Modern day refugees experience the same conditions as those living in exile in the book: disease, poverty, violence. There are 44 million displaced people in the world today.  Marchetta writes a story that while set in a fantastical world, is relevant today. This would be a great book for discussion because of these issues.

I loved Finnikin of the Rock so much, I woke up the next morning and immediately had to start the second in the series, Froi of the Exiles. To my dismay it was already checked out of the library, so I downloaded the kindle version. I read it just as quickly, and enjoyed it even more. I’ll post my thoughts on it soon. When I began reading the series, I didn’t realize that while the final installment is out in Australia, it won’t be published in North America until March. I’m dying for Quintana of Charyn.

I can understand why someone wouldn’t be a fan of this series, but I definitely am. If you like Kristen Cashore’s Graceling Realm series, you’ll definitely like Melina Marchetta’s fantasy. I also can see the appeal to fans who thought Days of Blood and Starlight was better than Daughter of Smoke and Bone. I’m even going to make Mister BS read this, because he loves fantasy like Lord of the Rings and Game of Thrones (right now he’s reading Leviathan by Scott Westerfeld).

Want a second opinion? Check out Tatiana’s review at The Readventurer. Like her, I didn’t think it was a perfect book (the technique of revealing backstory through a character telling a story to another character in dialogue isn’t my favorite, and I thought the climax scene could have been developed with more intensity) but like her, I still recommend it.

4 thoughts on “Fantasy Favorites: Finnikin of the Rock by Melina Marchetta”