I had the pleasure of seeing one of my favorite authors speak at YALSA’s Young Adult Literature Symposium this past weekend. Scott Westerfeld, who is most famous for his popular Uglies series, has also written a fantastic series for young adults that blurs genres. It is at once steampunk, science fiction, historical, and speculative fiction. In fact, Uglies was one of the first YA books I read as an adult, and I only picked it up because Mister BS taught a unit using the book his first year teaching.

Leviathan is an alternative history of World War I. This period of time always interested Westerfeld, and he was particularly intrigued by how the tragedy of one family — the death of the Archduke Ferdinand and his wife — could start a war that would leave 37 million people dead and Europe devastated. 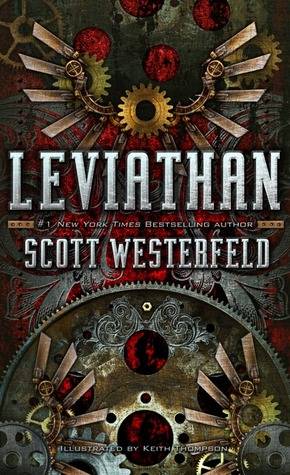 Prince Aleksander, would-be heir to the Austro-Hungarian throne, is on the run. His own people have turned on him. His title is worthless. All he has is a battletorn war machine and a loyal crew of men.

Deryn Sharp is a commoner, disguised as a boy in the British Air Service. She’s a brilliant airman. But her secret is in constant danger of being discovered.

With World War I brewing, Alek and Deryn’s paths cross in the most unexpected way…taking them on a fantastical, around-the-world adventure that will change both their lives forever.

When planning out his trilogy, Scott Westerfeld took inspiration from real rumors about the plot to assassinate the Archduke, followed the timeline of the real war, but centered the story on the Archduke’s (fictional) son, Alek. After his parents die Alek finds himself on the run with little more than his meaningless title and a few followers who remain loyal though his people have turned on him. His path crosses with Deryn, a girl who wants nothing more than to be a pilot in the British Air Force but must disguise herself as a boy and adopt the name Dylan in order to enlist.

In Westerfeld’s re-imagining, the Germans and Austrian-Hungarian Empire are known as the Clankers because they have steam-powered machines: enormous tanks on legs called Dreadnaughts, and Stormwalkers, which are two-legged machines operated by soldiers and meant for combat. The British and French are Darwinists, named for their genetically engineered beasts made possible by of Darwin’s discovery of DNA in this alternate universe. The Darwinists have message-delivering lizards who repeat what’s spoken to them, Huxleys, which are giant jellyfish-like creatures fabricated from the life threads of the medusa jellyfish, and the creature that gives the book its name, a large, fabricated airwhale that serves as Alek and Deryn’s transportation during the book.

This highly imaginative and action-packed story is enhanced by illustrations drawn by Keith Thompson. Westerfeld got the idea to do an illustrated novel after finding out that all Japanese genre fiction written for adults and young adults contain pictures when he received the Japanese version of Uglies. In fact, this was the case until the early 1900s in American fiction as well. With the advent of the camera, illustrators were largely out of work and illustrations in books became less common outside those published for young children. From witnessing his fan’s reaction to knowing that Japanese readers got pictures in their version of Uglies, Westerfeld knew that drawings weren’t absent because of a lack of interest. In fact, Westerfeld confessed that his favorite books growing up always had maps in the front, and he seemed thrilled that the fantastic allegorical map Thompson illustrated for Leviathan made its way into his book. 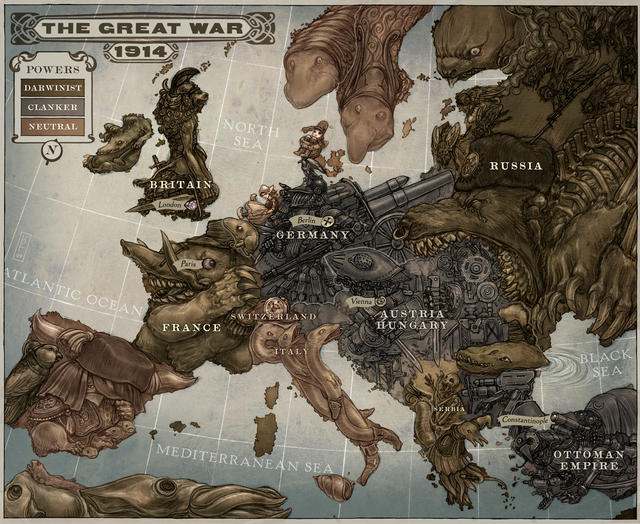 During his closing speech at the YA Literature Symposium, Westerfeld discussed how we worked in tandem with the illustrator Thompson to write Leviathan. The story evolved and new elements were added due to their collaboration. Particularly with a story involving complicated machines and frightening beasts, the illustrations bring the story to life and help the reader envision this alternate version of the war.

If you’re a fan of war stories, steampunk, or science fiction, Leviathan is a book you can’t miss. If you are looking for more illustrations of the Leviathan world, check out The Manual of Aeronautics which contains more drawings of the machines, uniforms, creatures, and characters of the Leviathan book series. I also highly recommend the audiobook version, which is narrated by Scottish actor Alan Cummings.