Vampires. Werewolves. Zombies. Even mermaids. There’s countless young adult novels that tell the stories of these supernatural creatures. It’s refreshing to encounter a wholly original take on the paranormal.

When I was a child, I was absolutely fascinated with my shadow. I’d periodically check to see if it was still following me and sometimes wondered if it ran off to make mischief the way Peter Pan’s does. If I was as clever as Marie Rutkoski, I’d have turned that into an idea for a story. 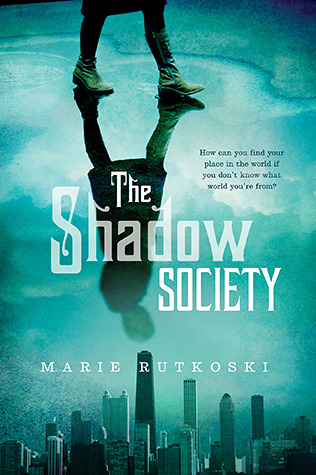 The Shadow Society is the story of Darcy Jones — at least that’s the name given to her by the uninspired Department of Children and Families social worker when she’s found outside a Chicago firehouse when she’s five years old. Ever since, Darcy has been shuffled between foster families and group homes. Now that she’s sixteen, she’s finally found a cozy home, a group of friends, a part-time job, and a passion for art. But she still feels like a freak. When she’s paired with the mysterious new boy at school, Conn, on a school project, she slowly realizes that there may be a reason for that.

As Darcy and Conn try to unravel the question presented by T. S. Eliot in “The Love Poem of J. Alfred Prufock”: Do I dare/Disturb the universe?” for their English class assignment, she becomes increasingly attracted to the enigmatic and slightly dangerous boy who rides a motorcycle and seems to have a secret.

Turns out, he does. When she kisses him, he slaps firecuffs on her and arrests her for being a Shade. Conn is an officer for the Interdimensional Bureau of Investigation and has been sent to capture this rogue Shade. Thus begins Darcy’s journey to find out where she comes from, who her parents are, and what exactly she is that takes her into an alternate Chicago where the Great Fire didn’t happen, and those with the ability to “ghost” — or become their shadow selves — are at odds with the human race. Darcy certainly does more than disturb the universe; she sends two into upheaval.

I enjoyed this book, but it wasn’t without it’s faults. I felt it lacked a clear villain and I didn’t feel like the concept of Shades as a terrorist organization was every completely realized. At times, the familiar tropes—a protagonist who is an outsider, forbidden love, orphans—overshadowed the original world. Though I don’t normally read a lot of middle-grade novels, I might have liked this better without the romance component and with more focus on Darcy and her friends.

I appreciate a unique idea and especially liked the realistic depiction of life in foster care. Rutkoski has taken a great concept and a quirky cast of characters and woven them into a highly readable story that fans of her Kronos Chronicles will enjoy as they graduate from middle grade reads into young adult fiction. Full of snappy dialogue and fast-paced action, the story moves so quickly I found myself wanting more time for world-building and getting know Darcy’s friends — and enemies — better. Still, readers will love exploring the Chicago of this alternate dimension where you can find a copy of Jane Austen’s long lost novel Reservations and the United States had its first female president in the 1970s, not to mention the strange shadows that may be lurking in your own.

Note: A copy of this book was provided by the publisher to my library. Marie Rutkoski’s The Cabinet of Wonders was our children’s selection for Read Across Lawrence.