Last Saturday, we had the pleasure of hosting The Merry Sisters of Fate—Maggie Stiefvater, Brenna Yovanoff, and Tessa Gratton—for an afternoon of conversation (and a signing!) at my library. We had quite the crowd and plenty of adults, both men and women, some of whom had traveled from out of town to attend the event.

The ladies were truly delightful. Maggie is hilarious. Brenna’s is soft-spoken and has a dream-like quality, much like her novels. Tessa is outspoken and articulate.

As a writer, what I most enjoyed was the discussion of their writing habits and insights. They first began (okay, Maggie began…it’s clear she’s the ringleader, the one to get the ball rolling, which I can identify with…) with an intro about how the book they were promoting, The Curiosities: A Collection of Stories, came to be.

It all started with a “hey guys, wouldn’t it be fun…” email that Maggie sent Brenna and Tessa, asking them if they wanted to start a blog where they shared short flash fiction, completely unedited. In Maggie’s former life as an equestrian portrait artist, she had taken up the practice of painting something everyday as a way to improve her skills. She thought the practice would also be good as a writer.

Because “they are crazy” according to Brenna and Tessa, they agreed.

But it did stretch their skills. Tessa claims to have not liked to read (or write) short stories before this project, which I thought was funny, since I enjoyed her short stories so much more than Blood Magic. They all agreed the deadline and audience motivated them and allowed them to explore characters and stories they might not have otherwise written.

The Curiosities grew out of their blog. They had initially thought they’d publish their favorites independently, every year. They did one collection, and hated the process of publishing alone. For this collection, they went through a publisher and found a digital pens that allowed them to make drawings, annotations, and notes to each other on the final manuscript, which were my favorite part about reading the collection.

The stories they selected were some of their favorites, but not all. Some were chosen because they showed growth, some were all in response to a single prompt, other were chosen because it seemed so much a “Brenna” story, but in fact, Maggie had written it. In assembling the collection, they took a “mix-tape” approach. 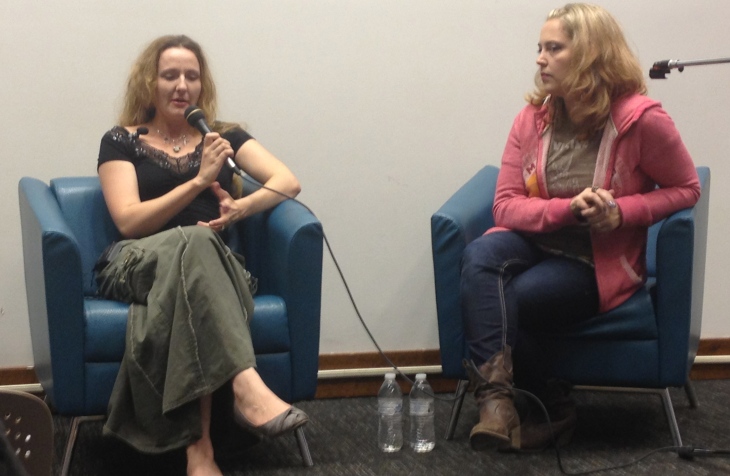 Many of those in attendance were writers themselves, many of them teens, and they asked great questions. Here are their responses.

On writer’s block: All three agreed that it was a sign that something was wrong in the story, that they had taken a turn down a path and needed to go back and retrace their steps. Maggie added that listening to music so loud it made her butt jiggle as she laid on the floor also sometimes inspired her.

On setting: For Brenna, the setting provides the tone for the book. So much of what I loved about The Space Between was how the description of Pandemonium set the stage for the story, so this made sense. Tessa said that her characters are very much derived from setting, which made me more interested to read The Blood Keeper since it is set around Lawrence. For Maggie, she can’t separate setting from characters or plot. She warned that if you can pick up your characters and move them to somewhere else to tell their story, something’s wrong. Setting is so much a part of each of her novels.

On pantsing vs. plotting: All agreed this was a false dichotomy. Maggie says she need to know the beginning and the end, the rest evolves during the process. Tessa stressed needing to know “one true thing” about her characters, rather than an elaborate backstory. Brenna claimed that her style is too erratic to even be called pantsing and confessed that sometimes she would leave whole sentences rife with commas as placeholders for words. “I knew how it should sound,” This led me to conclude that the cadence and rhythm of the story comes to her before the actual words, which explained why I thought her writing had such lovely sentences that were so lyrical. I do the same thing when writing, except I use all caps for a world I know isn’t exactly right but want to move on and revisit later, so I appreciated her insight and Maggie’s good-natured teasing about it.

On when to write: Brenna said she writes best at night, which is definitely true for me. Maggie also said her ideal workday would be from 4pm-2am, but that the reality of the business didn’t make that possible most of the time. She learned to write where and when she had time, even on airplanes. She confessed to being paranoid about people reading over her shoulder on flight, which she thought was ridiculous until she was working on The Raven Boys and the guy in the seat next to her laughed at one of the jokes she’d just typed out. When she looked at him incredulously, he shrugged and said, “it was funny.” This made me feel less crazy myself, since I always try to find a corner of the coffeeshop where no one can see what I’m working on when I write in public, and also more excited to read The Raven Boys.  Tessa is a daytime writer, as she likes to go to bed at about 7pm.

It was so exciting to learn about how the three authors “met” and became critique partners and friends. Maggie, brave soul that she is, had put out a call for critique partners on her blog. The idea was to exchange 50 pages and give feedback, and if they weren’t a good fit, to cut ties. Maggie said it was basically a critique partner dating service, and that she was very slutty…going through at least 13 before meeting Brenna and Tessa. She clicked with both of them separately, then decided they needed to be friends, too. All it took was a “Brenna, meet Tessa, Tessa, meet Brenna” email. And though they live in cities scattered across the US and didn’t meet for a year or two after they began critiquing for each other, they now all published several novels and are still close, sharing manuscripts with each other before an agent or anyone else ever sees them.

Their story certainly makes me hopeful.

It was truly a delightful afternoon, and so great to see so many teens (and guys, too! there were men present, I tell you!) excited about reading and writing. But the funniest story has to be from our new, part-time security guard. He’s a very large, intimidating man; you know we get some ruffians at the public library from time to time. He recounted this story to me as I stacked up chairs, waiting patiently for library patrons to get their books signed before I brought over mine.

He was making his rounds while Tessa, Maggie, and Brenna were stashed in the gallery adjacent to the auditorium prior to the event, all sitting cross-legged on the floor and laughing, and he busted in, asking them what they were doing, because they obviously looked like troublemakers.

“So these are like famous writers?” he asked me.

“Well, yeah, New York Times’ bestsellers. They write for teens. Werewolves and killer horses and witches and demons, that sort of thing,”  I explained.

Finally, the chairs were stacked and the line had dwindled down, and the other librarians and I went to have our copies signed. Our local bookstore, who without fail attend these events even when they don’t sell a ton of books, had sold out of The Curiosities. 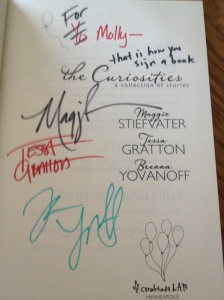 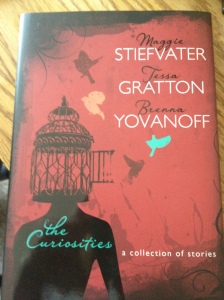 Though I am very shy, it was fun to meet all the ladies, and especially Brenna, who teared up when talking about reading my post on reading The Curiosities to children in the state’s care and hearing the other teen librarian share her story of reading them aloud on one of her visits to residents at juvenile detention, where she earned a round of applause (which is NOT typical of her visits to JDC). Maggie was critical of Tessa’s personalization “yo Molly–” and crossed through it, shaking her head in disapproval.

If you’re interested in The Curiosities, you can read my review here. I also wrote mini-reviews of novels by all three authors here, and the story about reading from my ARC to the residents of a home for juvenile deliquents and foster care kids can be found here.

2 thoughts on “An Afternoon with the Merry Sisters of Fate”