This weekend I’m presenting at the YALSA Symposium on Literature and Services for New Adults with another YA librarian. For the past year, I’ve been reading a lot of New Adult fiction in preparation. I read a handful of titles in late 2012 and early 2013 when the fledgling category was picking up steam. I wrote about my initial thoughts (part 1 and part 2) as well an article in NoveList Newsletters.

Then I watched, and waited to see what would happen. I formed a lot of opinions based on what I saw happening, which was that New Adult was just becoming a subgenre of contemporary romance and that there wasn’t as much variety or depth to the stories as I would have hoped. Despite initial success of some titles and deals with traditional publishers, the market had cooled off fast and new authors were having a more difficult time breaking into the print and library market.

When Meg asked me to be on this panel, I figured I should dive in and do some more reading. And so I read. A lot. And most of the books had me cringing the entire way through. They weren’t something I’d personally pick up myself. While I do understand the appeal, they weren’t my personal taste.

But a few did manage to keep my attention. These are the titles that earned a solid recommendation from me. 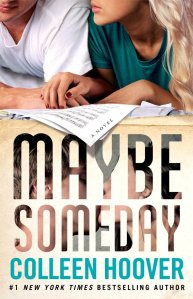 I tried several other Colleen Hoover novels, and this is the only one I actually liked. (I read half of several and finished Confess but had too many reservations to truly recommend it).

While the meet cute is soooo contrived (as with many New Adult titles), I was able to push past that. Sydney’s long term boyfriend is cheating on her—with her best friend and roommate, so she flees. Ridge, the cute guitar player from across the way luckily offers to let her move in.

Hoover was actually able to hide yet hint at an important plot point—Ridge is deaf. I was really fascinated by his backstory and ability to play music, even though he can’t hear. I can’t speak to how authentic it was, since I have no experience with deaf culture, but I did find it compelling.

Sydney and Ridge’s growing attraction while living together is at odds with the fact that Ridge has a long term girlfriend who is also deaf and very much in love with. They’re totally perfect for each other, but both Sydney and Ridge have trouble fighting their feelings, even though they have the best of intentions. Sydney is a bit of a songwriter and helps Ridge with lyrics, and their collaboration fosters a very intimate relationship.

This novel had all of the hallmarks of New Adult —drama, angst, sex—but the messy, complicated situation felt very authentic to the way relationships are at that stage of life. In reading reviews, many readers had a hard time with the “cheating” and that Ridge and Sydney kiss while Ridge is still with his girlfriend, but I thought it was realistic. Hoover has a compulsively readable style, and this story had more layers and depth than typical New Adult stories. 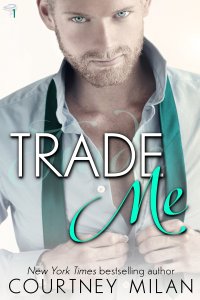 I haven’t read Courtney Milan’s historical romance, but I know she is very popular and a co-worker raves about her, so when I saw she had a New Adult book out, I had to check this one out.

This has a ridiculous set up: Blake, a billionaire’s son, has a college class with Tina, a working class daughter of an immigrant, and they find themselves arguing in class, and then they “trade” lives. But I was surprised out how well Milan handled all the social issues including social class, poverty, racism, Falun gong, eating disorders, and discrimination against trans individuals. The dialogue was witty and fun. So despite a fairly predictable and standard plot, it was a quick, fun read. The sequel to this will feature a trans heroine and a non-white love interest, so I also appreciate how Milan is exploring stories outside the bad boy/college girl dynamic.

The Year We Fell Down by Sarina Bowen
Goodreads | Amazon 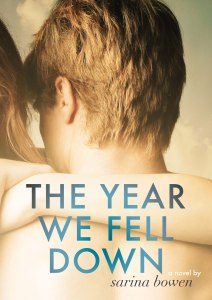 The writing in this was a bit amateur and simple. But this one has the most authentic love story and the best chemistry between the hero and heroine. Corey was a star hockey player until an injury during a game put her in a wheelchair. Adam also plays hockey, and breaks his leg in a stupid stunt, so he’s out for the season. They are neighbors in the dorm with accessible rooms. Even though Corey has the hots for him from day one, he’s got a bitchy girlfriend who is still in the picture even though she’s conveniently spending a semester abroad.

Corey and Adam have so much in common and have such a good time together. Through video games and classes, they develop a great friendship. Their banter is witty and they have great senses of humor. Why is Adam with his bitchy, rich girlfriend? He’s got a backstory, don’t worry. Both characters have some issues to work through.

What really struck me as fantastic is how when they do hook up, it’s because Adam genuinely cares for her and is interested in helping her find intimacy and pleasure despite her injury. It’s fun and instead of being perfect fantasy sex, it’s a bit awkward and true to life, but sweet and still sexy. It struck a great balance.

Both characters have great arcs and really show development. This avoids the over-the-top angst of some New Adult titles while still hitting the appeal factors. I would be interested to check out some of her later books to see how if her writing has matured.

These are the titles I have read and an recommend. I’ll also share a few posts on a couple of other issues: the line between YA, NA, and romance, and how marketing labels category designations are applied to each; genre fiction and New Adult; literary fiction that may appeal to NA readers; Nonfiction titles of interest to NA readers; and the actual presentation we’ll be giving on Saturday morning.