I’ve been wanting to write about several aspects of social media in libraries, but all these posts are still sitting in my drafts folder.

I’m interested in the subject and always looking to learn more about how libraries can use social media to meet the information needs of patrons, market their service, and embed themselves in communities,—even create new ones. But I’ve struggled with how to begin. I’m not claiming to be an expert, but if there’s anything I’ve discovered in the couple of year’s I’ve been blogging, I can learn a lot about a topic just from taking the time to research, organize my thoughts, and solicit feedback from others. So I’m just jumping right in.

I’m still learning (and constantly looking to others for ideas and inspiration), but I think my library is coming up with some innovative methods to leverage social media, and I think a lot of the types of posts we do can be successful in libraries of all types and sizes.

One of my favorite parts of my job is being a part of my library’s social media team, not only because it’s fun, but because it can have a great impact. I think there’s value in taking the time, effort, and energy to create engaging, original content that will both inform and delight patrons.

The Value of Social Media for Libraries

But I’m sure a lot of people are skeptical of the real worth of social media.

How can tweeting about lines of poetry expertly paired with rap lyrics make a difference? Can that really be part of someone’s job? Why does any of it matter?

It’s easy to dismiss the worth of the work that goes into having a robust and vibrant social media presence as “fluff” or “something to do when there’s extra time.”  It’s easy to put it at the bottom of a to-do list and even easier to just phone it in, posting for the sake of posting without a strategy or even a goal. It’s hard to measure impact, and it’s difficult to keep up with the ever-changing social media environment or know which platforms are worth the investment of a librarian’s precious time.

I believe there are countless benefits to putting in the effort to contribute interesting, inspiring content on social media, no matter the size of a library’s  audience. Still, there are lots of reasons to be conservative and cautious about what you tweet or post on Facebook. And while one can discuss these in an abstract way, I think it’s easiest to demonstrate with an example.

Libraries and Social Media: The Case of the Overdue Library Book

The other day, work began as it normally does. I got a cup of coffee and sat down to go through the day’s request from patrons before I began sorting through my new stack of damaged items, checking problem holds, and finalizing my orders for the week. My supervisor, who selects our adult fiction and nonfiction, was going through her damaged and other miscellaneous items sent back from the circulation department the previous day, when she found a curious book.

Now, it’s not uncommon for us to get a book, DVD, or CD that is no longer in our system on our problem items cart. It’s not unusual for items that have been paid and marked lost, their records suppressed and purged, to come across our desks. But this particular cookbook had been due in September of 1992, which we only knew because it still had the due date stamped on a slip in a pocket in the back of the book. And that was a bit out of the ordinary. Though I’m sure some libraries still hand stamp cards like this (at least, the high school library where I interned in still does) it’s a dying practice. A novelty, if you will.

I thought it was cute, so I snapped a photo of it and posted it on the library’s Instagram account. 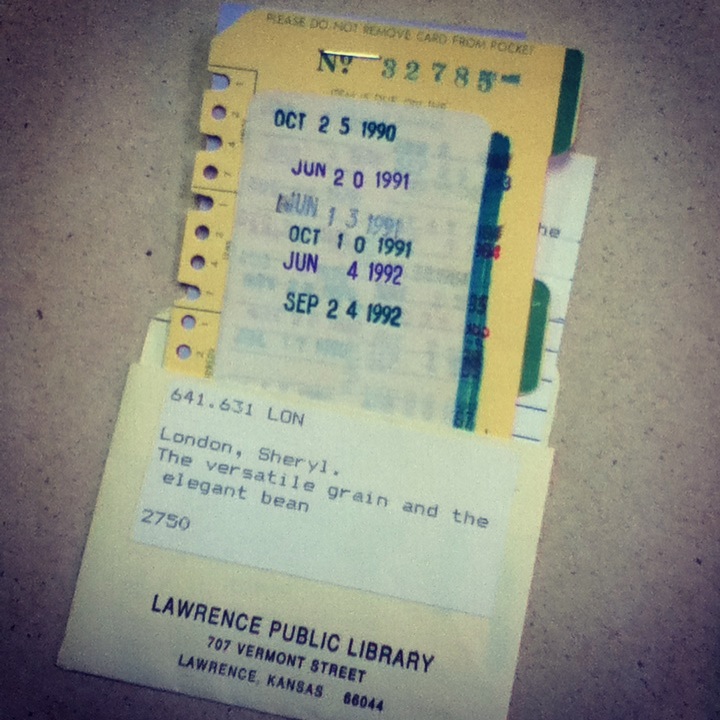 We routinely share “behind the scenes” posts on social media, whether it’s a snapshot of acquisitions unpacking our dozens of Game of Thrones Season 3 DVDs to catalog the day before they hit the patrons’ hold shelf or photos of the renovation and expansion of our building that’s currently underway. I didn’t really think much about it as I tapped that little button that would automatically tweet the image.

I went about my day. When I came back from lunch, I learned that the local news had called about doing a feature for the nightly news after seeing our tweet about the extremely overdue library book.  Luckily, our programming librarian was willing to do the piece, and I didn’t have to appear on the news in my galaxy cat t-shirt (and she got to plug the evening’s program, our visit with Pulitzer Prize winning author Marilynne Robinson).

I thought it was kind of silly that they wanted to do a segment on the news about an overdue library book, but sometimes it is a slow news day…and I guess it’s good that the local news pays such close attention to the library’s Twitter feed?

A Kansas City news station picked it up, and then The Huffington Post, and  Mental Floss featured it. Which isn’t such a big deal or anything.—these were the ultimate in fluff pieces. But they all started with that off the cuff Instagram photo and tweet I sent before I’d finished my first cup of coffee.

And what a stereotypical “library” story. So old-fashioned, when we’re also doing fantastic, innovative things (that, to be fair, our local media does a decent job of covering).  It’s kind of lazy journalism.

But it reminded me that any spur of the moment post can ripple through a community as quickly as something you spent a lot of time and effort into making can die unseen.

There was no real harm done from the snapshot of the inside cover of the book and its vintage due date slip, but a few people did make complaints on Facebook—comments about fines and charges to their accounts. It gave us the opportunity to clarify our policies (which caps our fifteen cents a day late fee at $4.50 per item, as long as it’s returned in good condition eventually). Still, it’s easy to see how something like that could have further implications. (Like embarrassing the patron who likely found this book while cleaning out some forgotten closet, or worse).

So, what was my point?

You never know what is going to go viral or what’s going to create an unintended backlash. All you can do is look for those opportunities to share what may inform or delight your patrons. Be bold, but cautious.

In the coming weeks I plan on sharing some strategies to connect with people and promote libraries through various social media platforms. If you’re interested in how libraries (or blogs) engage patrons or readers on social media, I hope you’ll join the conversation.

One thought on “Social Media and Libraries: The Case of the Overdue Library Book”