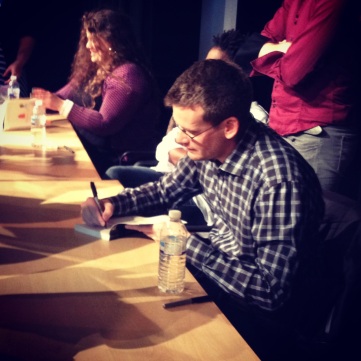 Because I have the coolest job, I got to attend this event for work! John Green, Rainbow Rowell, and Jacqueline Woodson came to the Plaza branch of the Kansas City Public Library for a talk and signing.

Rainbow Rowell is well near the top of my greatest people in the world list, and I’ve only spoken to her twice. I first got to meet her in NYC at Housing Works Bookstore for the Tumblr does YA at BEA event, and she was so much fun.

This has not changed in the months since. Here’s a quick run down of why I enjoyed hearing her speak again (and why we should probably be BFFs).

I am kind of a Rainbow Rowell fangirl.

I confess that I haven’t read any of Jacqueline Woodson books. She’s a highly acclaimed author, but I knew her mostly for her children’s books.  While I’ve included her YA books on lists and featured them in displays, I haven’t read one myself yet.

Hearing her read from her books definitely made me want to change that. The excerpt she read from Feathers was amazingly sharp and witty and real. It completely drew me into the story.

I have very ambivalent feelings toward John Green. I really love what he does for YA literature and to get teens reading and his whole nerdfigther internet prescence, but I haven’t fallen in love with any of his books yet. I did purchase a copy of The Fault in Our Stars because I think I am at a place where I can read it without any expectations or hype. So that will be happening soon.

His talk was interesting, of course, but the highlight was when he read an excerpt from his work in progress. No, I didn’t record it, because his editor would kill him. But I will say it was about two boys who seemed to be from a less privileged background than the characters from his previous work. In the scene he read they ran an umbrella scam, stealing ones from diners and then selling them at an inflated price to people on the street. But this is just the beginning of their scams, and they end up in a lot of trouble. I’m excited to see him grow in new directions, because while I admire his style as a writer, I just haven’t been swept of in any of the stories he’s chosen to tell thus far.

I love going to author events, because it always leaves me with a renewed commitment to my job as a librarian, but also to writing, even if I only ever do it for myself.

I love YA author events in particular, because there seems to be such a true sense of community withing the YA world. These authors all genuinely liked one another. YA authors mostly seem like they are having so much fun, and that makes reading all the more fun.